This year it was another panto adaptation of a famous story.
In order to avoid any suggestion that DVC were getting into Shakespeare it was titled "Sun, Sand AND a Nasty Little Serpent" rather than "Antony and Cleopatra". 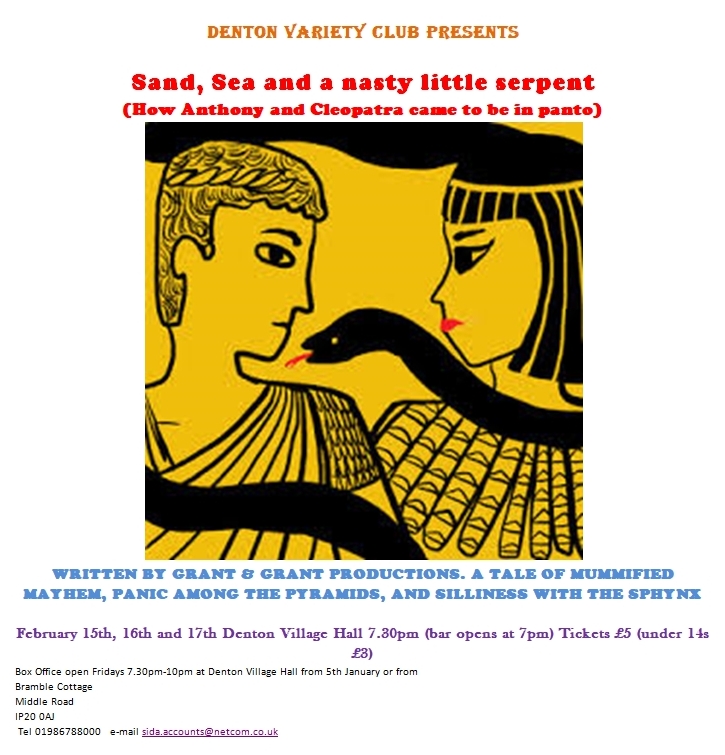 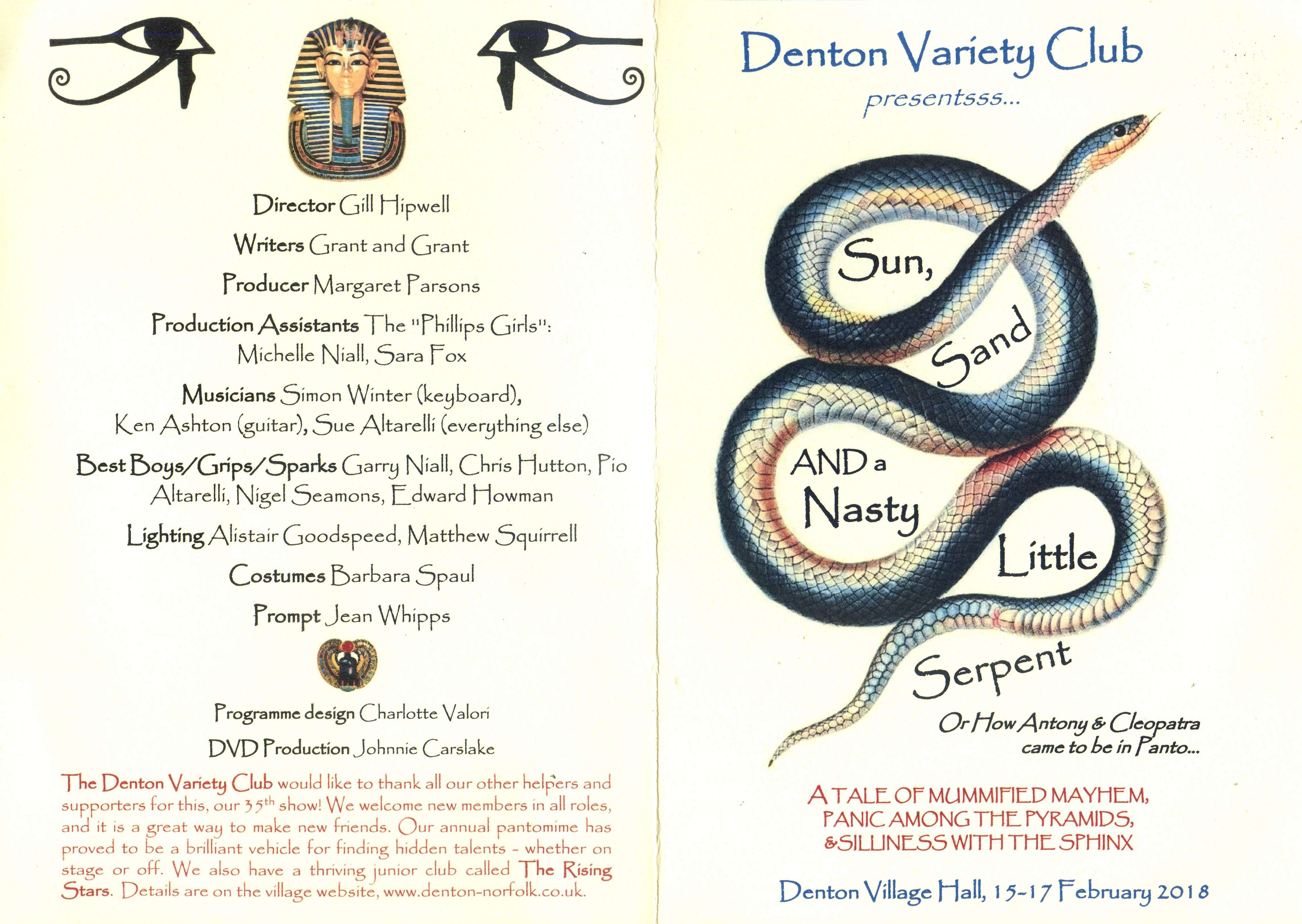 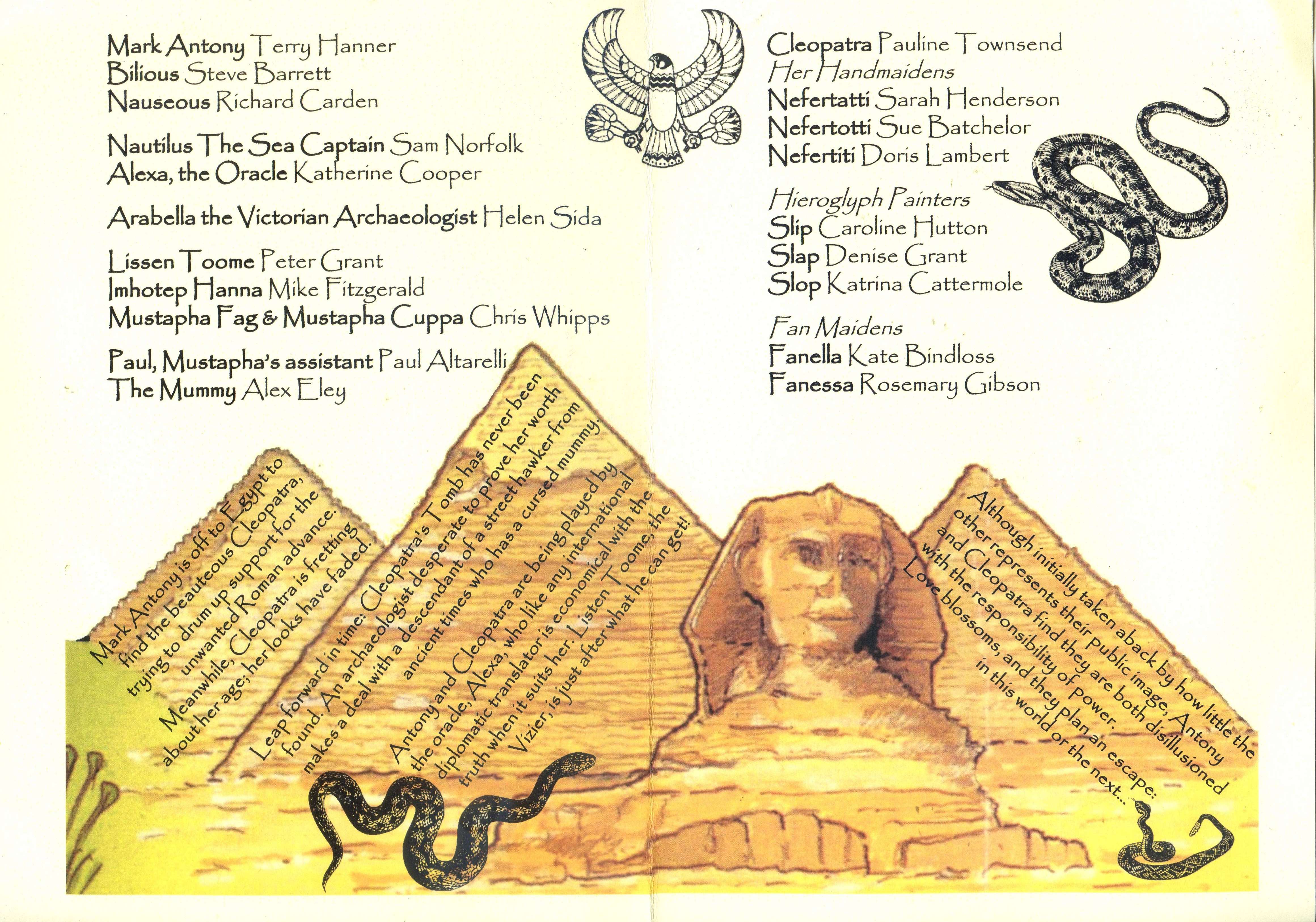 DVC's production, to fit the panto slot for 2018, was very ambitious, taking some of the historical characters of 2000 years ago and turning their tragic lives into the comic events with which we were presented on 16th, 17th and 18th February at Denton village hall.

The show was written by husband and wife team Peter and Denise Grant, and each took an active role on stage, too: Denise with little to worry about losing her lines (a nightmare for all actors) as a member of a trio of hieroglyph painters forbidden to speak, and Peter as an ambitious Vizier to his Pharaoh Queen, Cleopatra, earning boos from the audience as he plotted and schemed for ultimate power. One was reminded of the entertainment gained by watching many similar successful villainous roles performed by Hollywood's English actor Basil Rathbone.

Before I return to the performance (I attended on Fri. 16th) I must pass comment on my first delight of the evening and that was viewing the attractively produced programme. The graphics were well presented and the comic names of the characters sharpened the appetite for the evening ahead. Charlotte Valori was credited with its design, so, thank you Charlotte. Here I make a plea about which I have spoken before but has not yet been followed through. As well as credits for the cast and production team I would like to be informed of the breakdown of scenes and their locations and, when appropriate, an indication of their moments in time. I became lost sometimes between Ancient Egypt and its Victorian counterpart. Maybe that's simply an age-thing with me, and nobody else had any problems. Most of all, though, I would like to see in a programme a list of all the musical items in the production. The cost was a modest 20p. For 40p couldn't we have two sheets of information in the future?

For several years now the DVC has been bold in constructing pantos that are “different” from the traditional sort, but I confess to wanting to see many of the traditional ingredients within any new venture. The opening number of the show was far from traditional - “Another Brick in the Wall” - rather a depressing song which got all of us off to a gloomy start. But at least it let us know that the Egyptian working man and maid were having a tough time, and parallels were briefly made with present-day Brexit problems

I was pleased to see that we were taken into confidence occasionally by some of the characters, essential in the panto format, and we were able vocally to join in sometimes. Hero and Heroine, in scenes which demand their absorption with each other should always ignore the presence of an audience, and Terry Hanner's “Tony” and Pauline Townsend's “Cleo” were most suitably tender with each other.

Helen Sida, as the Victorian Archaeologist, Arabella, certainly let us know she was “ON”. A clear-cut, firm performance, and you knew the show was in good hands. Also showing a good familiarity with the stage (and good care of his assistant, Paul) was Chris Whipps. He played two members of a family of street hawkers, each character separated by nearly 2000 years. At first I was at a loss why Chris and his assistant both appeared in different scenes wearing different hats and outer clothing, but eventually the penny dropped that the changes represented the fact that Denton's own Tardis had brought us to a different century and that we were now with ancestors, or, alternatively, descendants.

I liked very much the invention of the character names, and, I am sure, given more time for thought and ideas to gel, that more could have been developed to use those names with more effect.
It is important for an audience to grow used to names and that they can be a useful source of comedy. Three handmaidens, three glyph painters, and two fanmaidens, all with funny names to separate them, but each group needed within it stronger character differences to encourage more comedy. Think of the differences of character between the Marx Brothers, Abbott and Costello, and Laurel and Hardy.

Tears of laughter and slightly aching ribs affected me, as well as the audience member sitting next to me, as we shared the same sense of the ridiculous watching Bilious and Nauseous (Steve Barrett and Richard Carden) two Roman soldiers trying to do a Wilson and Keppell – without Betty – routine: i.e. a “sand dance”. Making DVC's newest member do a dance with one of its oldest was brave and I think we all appreciated it.

Much good, conscientious work was done by people I have not mentioned by name. They will know how important all their work is to the success of a production and I acknowledge and appreciate all their effort. May I just say how delightful the settings were, especially the backdrop of the pyramids and sphinx; how effective the animated sphinx was (a close cousin obviously of a gargoyle of the past); how impressively colourful the costumes were, and how the lighting enhanced everything. The tiny village hall stage became a blaze of vitality and colour.

Once again, as in previous years, I have pleasure in praising the DVC for its effort to entertain us so well. I look forward to next year's Panto. I would hope that the Club, using all its experience gained with its last few years' shows, might once again attack a Trad Panto with “local” appeal.

“You Are The Champions”.

It is planned to include some pictures from the production here soon.