This year’s adult production was “Aladdin” performed on the 16th, 17th and 18th February.
There was some dispute about whether this was the 30th or 31st production (though we list 31 and try to explain the situation on our main DVC History Page!) but, whichever milestone it was, it was marked, on Saturday night, by the presentation of medals to the four people who had been involved in every show: Terry Hanner, Doris Lambert, Margaret Parsons and Barbara Spaul. 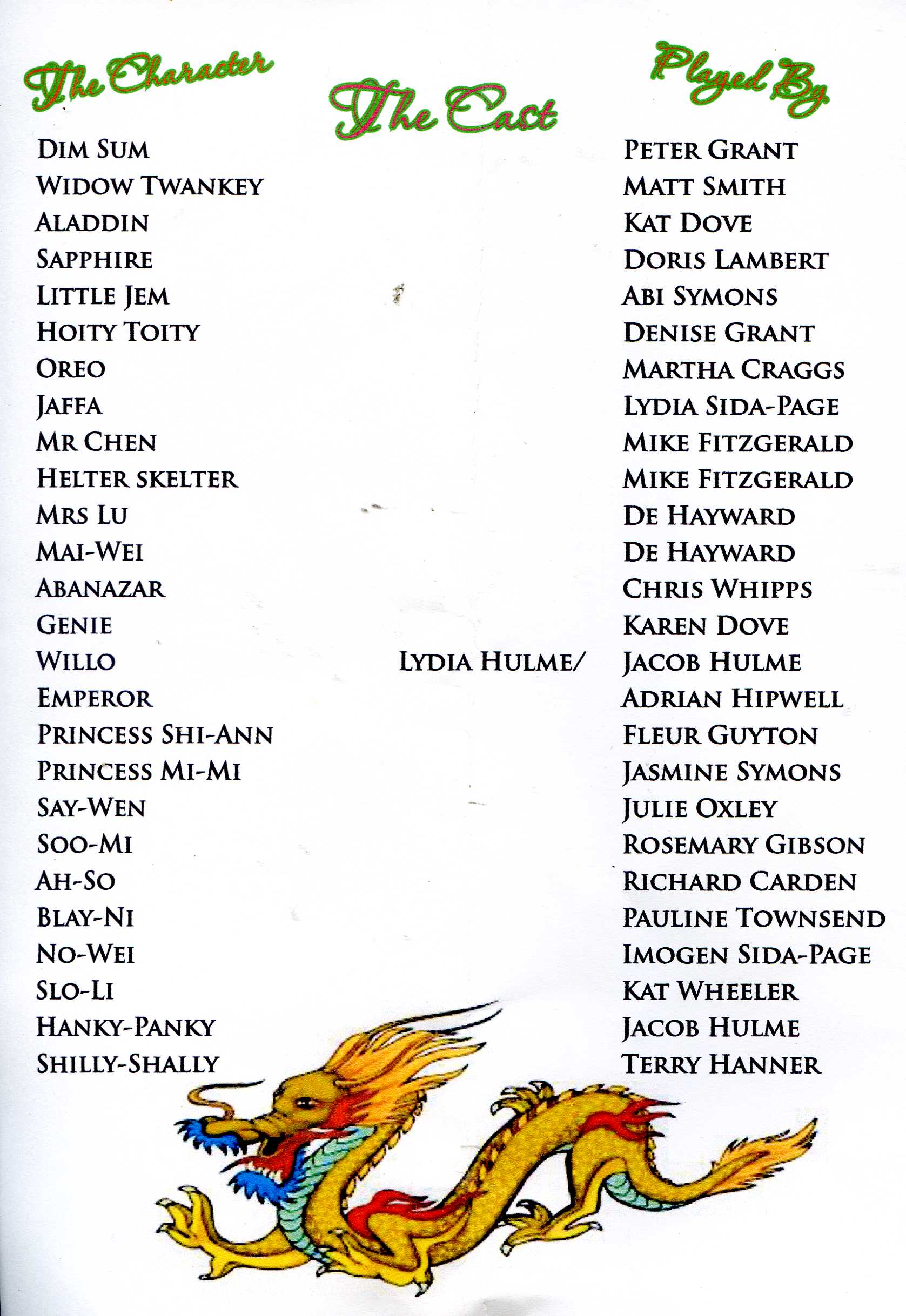 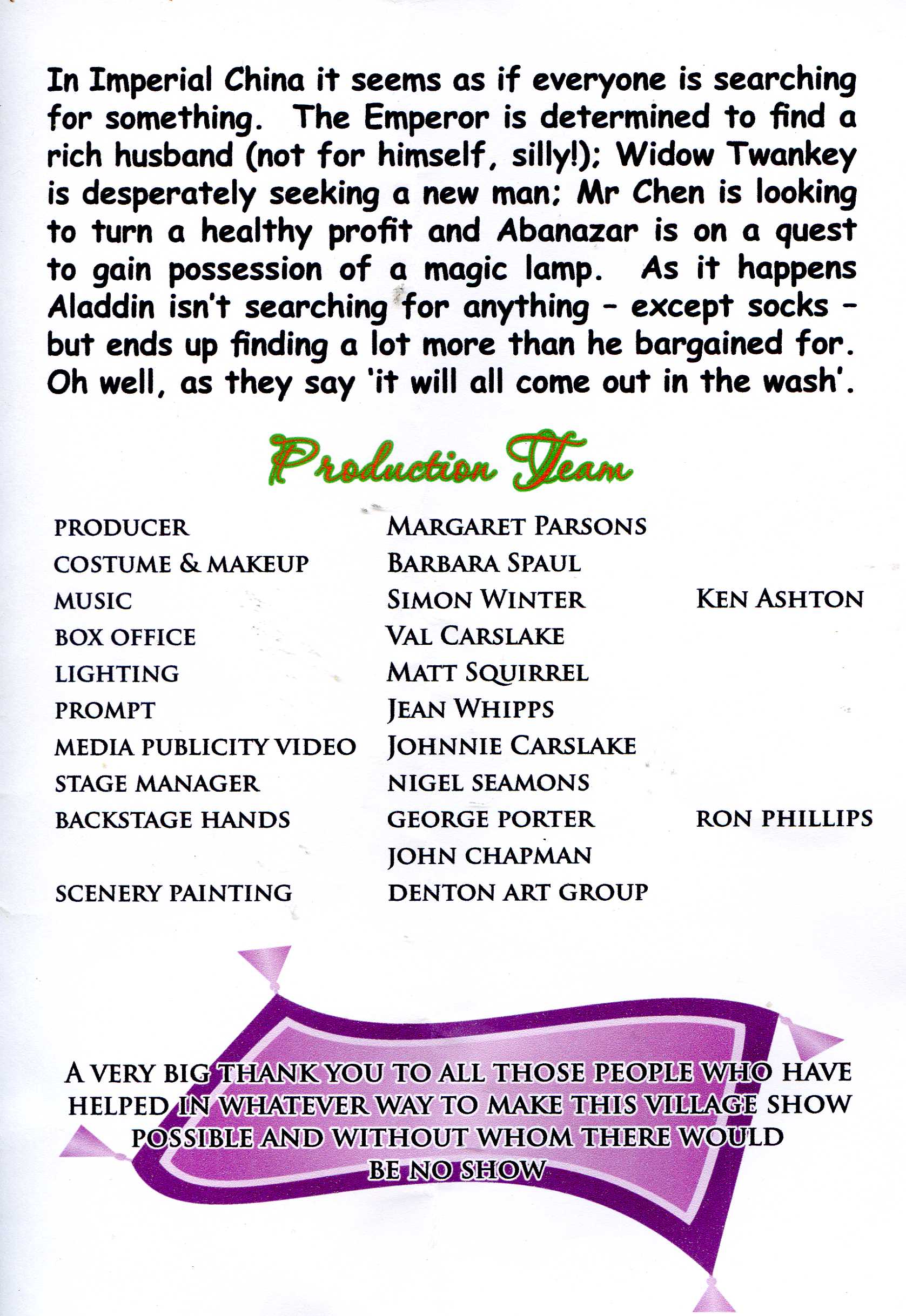 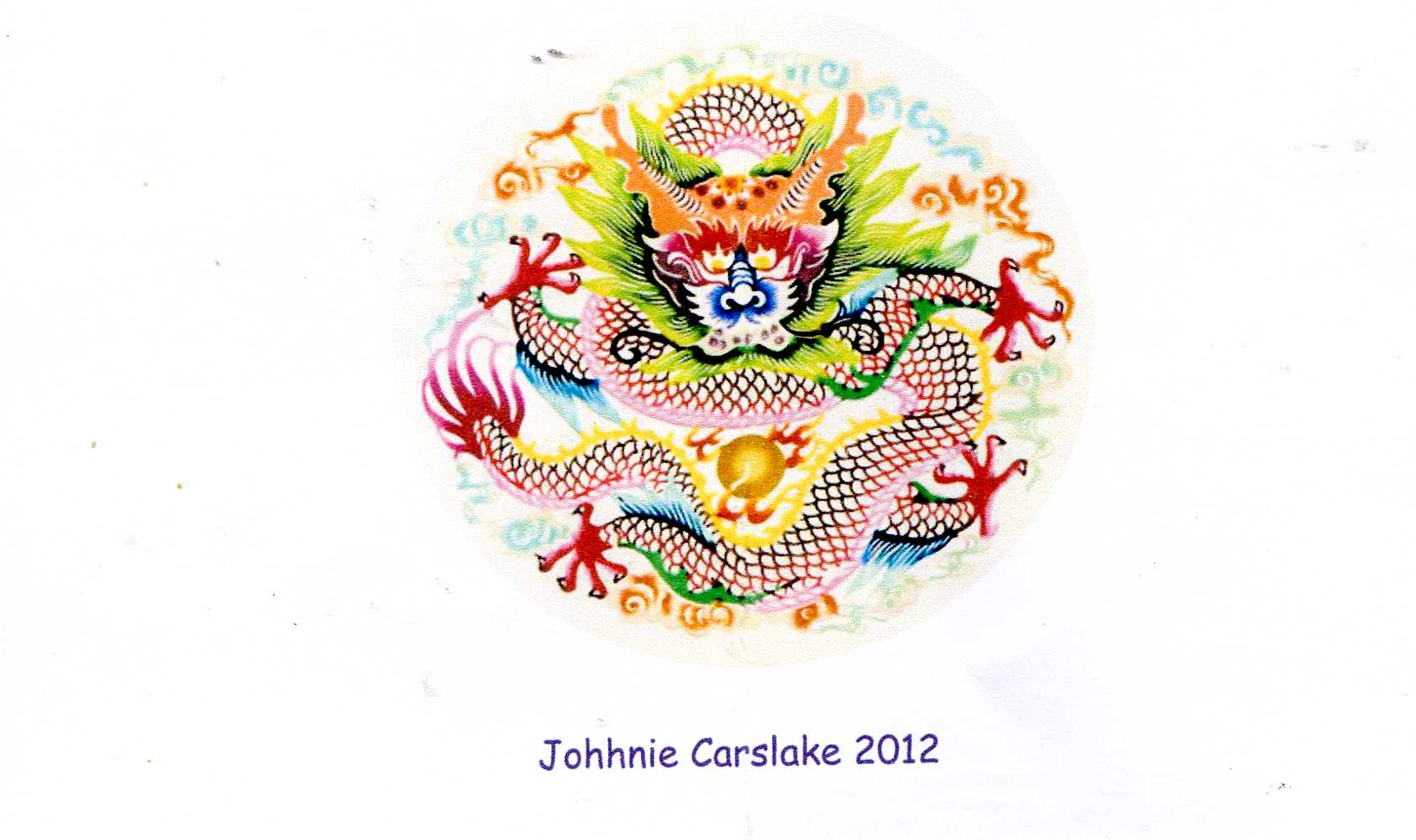 This year we are delighted to have two reviews of the production. Our thanks to both reviewers.

In the 30th year of D.V.C. the players and audience of Denton set about the evening with their customary vigour and enthusiasm revealing what we already knew… we all ‘like to Boogie on a Thurs, Fri and Sat night’. Such stamina!

Once again Gill Hipwell’s winning formula of clever script writing and deft direction has hit the mark. Ingenious character names brought smiles to us all and it was clear that players thoroughly enjoyed their roles.

No pantomime can be judged a success without a boisterous connection between players and audience; on these terms alone this was truly a triumph. Whilst the booing and hissing at the menacing Abanazer (Chris Whipps) often reflected our dislike of his convincing display, it was matched by the enthusiastic singing from the floor of ‘Can’t buy me love’. It was so good to be able to belt out an old favourite in the company of a hundred other would-be Beatles.

Regular visitors to Denton productions are keen to see our favourites trip on and off the stage and whilst Shilly–Shally (Terry Hanner) may continue to sweep all before him, it is great that future plays are in good hands with the younger talent treading the boards with such poise. Confidence to deliver lines and fill in unscripted pauses were there for all to see with great performances by Oreo (Martha Craggs), Jaffa (Lydia Sida-Page), Little Jem (Abi Symons) and Princess Mi-Mi (Jasmine Symons).

It is one of the less well-kept secrets that there are some rich singing voices amongst the cast of a Denton pantomime. Perhaps it was not so much of a surprise then that Dim Sum (Peter Grant) and Widow Twankey’s (Matt Smith) version of ‘It takes Two’ was as entertaining as it was easy on the ear, whilst ‘Wherever You Ar’ sung by Princess Shi-Ann (Fleur Guyton) and Aladdin (Kat Dove) wowed the audience into silence before tumultuous applause greeted their conclusion. The Genie’s (Karen Dove) singing of ‘Do you believe in Magic?’ achieved what is the ambition of every player… leaving the audience wanting more.

Barbara Spaul’s costumes demonstrated her usual flair for invention, in particular the variety of headgear worn by Widow Twankey, the Emperor and Abanazar.

Try as they may, the Imperial Guard failed to impress their demanding captain Ah-So (Richard Carden). In his dithering colonial style he constantly implored his ‘crack’ team to train harder and throw themselves into action. Ever willing, one of the guards took him at his word, tripped and fell from the stage, narrowly avoiding the musicians who remained unmoved by the alarming intrusion; luckily - no damage done.

In spite of the chaos – or because of it – the players come to the finale with all their problems solved. The Emperor has suitors for his daughters, Widow Twankey is back in favour at the laundry and Dim Sum has the love of his life… at last.

Not quite last. With the players singing the show to its finale (‘We like to Boogie on a Pantomime Night’), at the back of stage some of the behind-the-scene cast step into limelight for a few seconds. We know they cannot all be there – a musician never leaves his post – but they all deserve the applause; the producer, musicians, scene shifters, scenery painters, costume makers, make-up, ticket office, prompt, video operator, light operator and anyone else who, along with Aladdin’s rubbing of the lamp, helped with the magic that made another DVC success.

The annual panto presentation by Denton Variety Club for 2012 was “Aladdin”, especially written and directed by Gill Hipwell. I attended on Friday night, 17th February, and was surrounded by a highly appreciative audience, ready to rise to the bait that we “weren’t as good as last night’s audience”, and joined in with all the boos, cheers and “he’s behind you!” which are so necessary a part of the success of any British panto.

Gill deserves much praise for taking hold of the original storyline concerning Aladdin’s rise to fame and fortune and mixing it with so many other storylines which achieve the aspirations and dreams of love of the other characters. She makes sure that all the characters have important roles to play and fulfill and are able to show us, the audience, that each of them deserves a road to happiness. Even the greedy, the selfish, and the wicked are given chances to redeem themselves at some future moment after the curtain has fallen. Gill writes an entertainment which gives all the performing members of the DVC ample opportunity to contribute to, and shine in, the success of the whole.

The contributions given by those members of a production team who don’t necessarily appear in the limelight are essential to the success of a show. The decor, lighting and stagecraft personnel, the musicians too, all have their part to play. They deserve, as well, our applause.

I have yet to discover why in the programme two names are credited against the character Willo. I saw Lydia Hulme perform it, and very good she was, too, giving us a well–dressed and comfortably laid–back ‘fetcher’ genie of the ring. Talking of well–dressed costuming, I must praise all the effort made to conjure up the colour and ambience of the Far East, (and of the Middle East, too, with Abanazar’s Arabian Nights’ attire). Chris Whipps gave us a villain to beware and one with whom it was a delight to trade snarls. Villains can be such fun to play and Chris seized every opportunity to satisfy our need to boo.

Perfect sympathetic “Ah–h–h !” moments were handed on a plate to us by Peter Grant’s lovesick Dim Sum, and how nice to hear his musical voice, too, In fact, how nice it was to hear such enthusiastic singing in the ensemble numbers, and such tender rendering in the love songs. The object of Dim’s admiration was of course, our young hero Aladdin’s mother, Widow Twankey. The widow had her own agenda, seeking a pliant new man upon whom she could lavish all her attention. Rather strangely she was not encouraged to cross tablets of soap with Abanazar to clean up his act, but instead got rather more than she bargained for from the young suitor, Hanky-Panky, a firework ready to explode like a Chinese cracker. Welcome back Matt Smith (Twankey) who showed us all, like Dorothy in “The Wizard of Oz”, that love and happiness are right there under one’s nose all the time. Jacob Hulme as Hanky-Panky showed us a peacock ready to sparkle, if only his blue touch-paper had been lit! Very amusing and very Panto!

I am prevented here by lack of space to mention other performers by name, but nevertheless I was impressed by all the various characteristics the players brought to their roles. Perhaps one person deserves gratitude which may not always be openly acknowledged by us spectators, and that is the Prompter. Well done, Jean! On Friday night you gathered up so many dropped stitches and kept the showboat on an even keel that it became an extra enhancement to the evening’s entertainment. It matters not in a DVC entertainment, presented by the villagers and for the villagers, that mistakes might occur during the journey if, at the end, we members of the audience can say “I thoroughly enjoyed that!”

So – I thoroughly enjoyed that, and I hope you did, too. 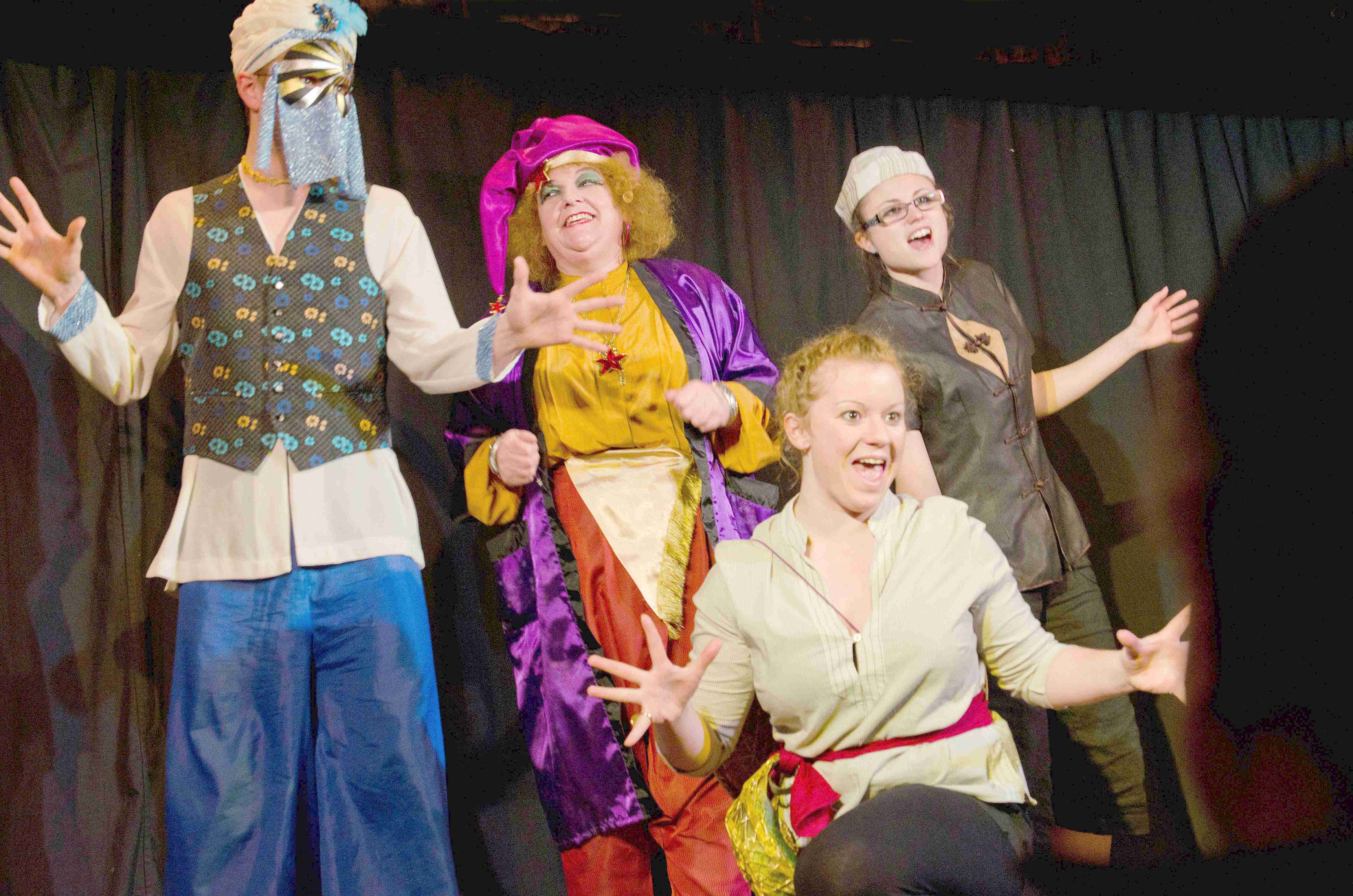 This year’s Rising Stars production was “Mind the Bugs Don't Bite” performed on the 9th and 10th November. 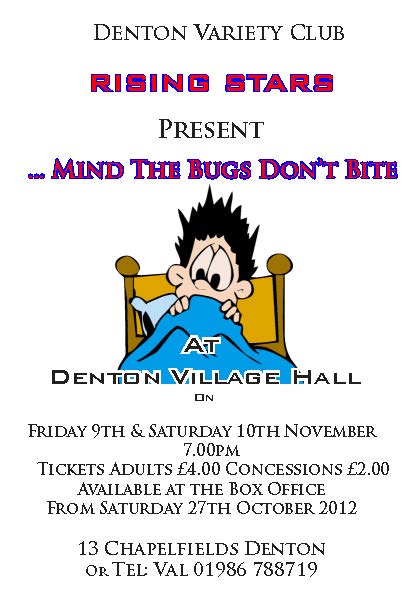