This year’s adult production was “The Golden Goose”, a “grim(m) pantomime”, performed on the 19th, 20th and 21st February. 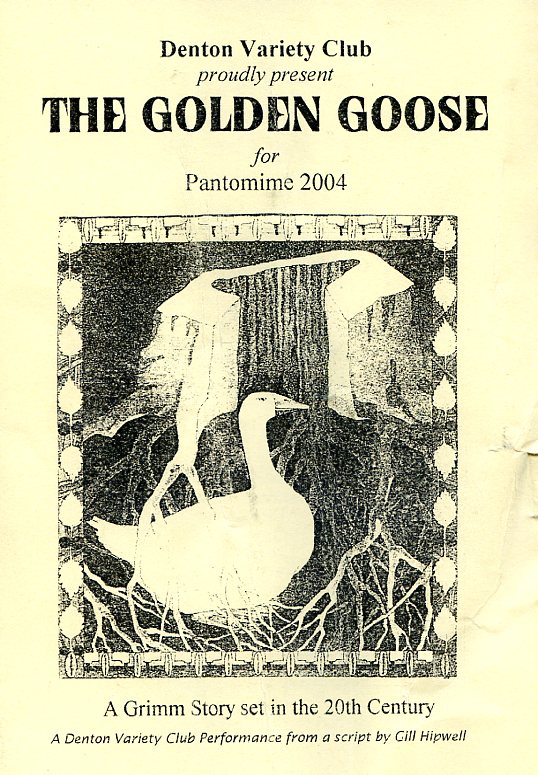 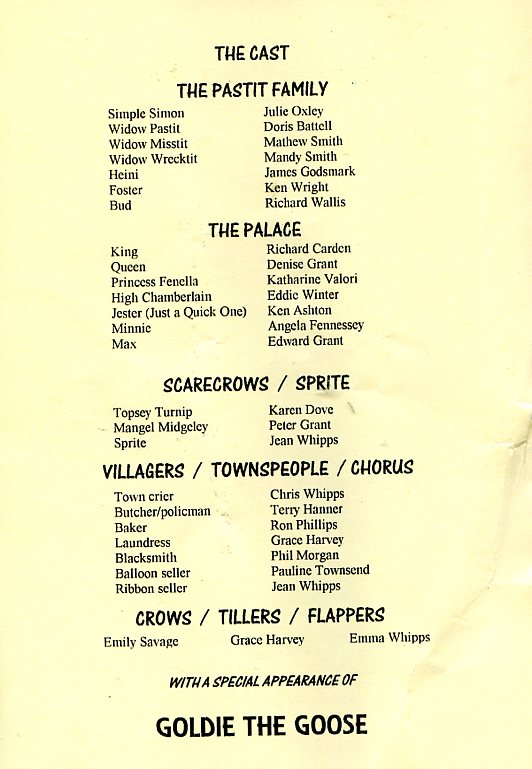 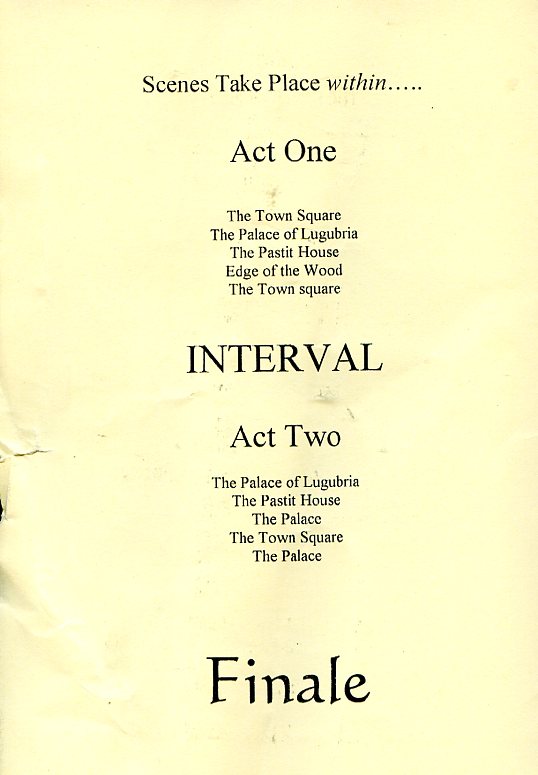 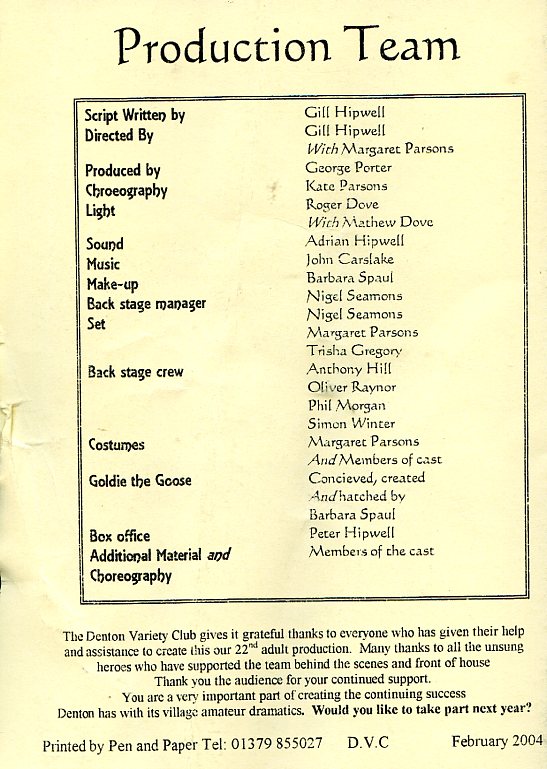 A Report from the Garage

From the parish magazine, April 2004.

By Ron the Baker

After putting my hand up for a small part in the Denton Pantomime, I thought to myself “What Have I Done!” A few weeks later the rehearsals started and I found myself as the village BAKER. All too soon it was the first show and I must admit I was quite nervous but excited at the same time. The atmosphere in the “stars” changing room was really great, a lot of encouragement and help from all the cast was very much appreciated.

The whole show turned out to be one of life’s good experiences and congratulations to all involved. The baker’s part was very small but you wouldn’t believe how popular I became during the show. This came about around interval time when some of the cast were getting hungry, and soon the bakers two loaves went missing with a request for a “piece of cheese would be nice”, so the following three nights they were supplied. My pleasure, and thanks again for a great panto.

From the parish magazine, April 2004.

The story, as told by the Brothers Grimm, is of a kind-hearted, hard-working lad who endures the bullying of his family, earns the gratitude of a wood sprite and finds himself the proud possessor of a magical Golden Goose. Those who covet his good luck try to seize the goose for themselves but are unable to let go and are condemned to follow in a long skein wherever the boy and his goose travel.

The fantastic but comic sight induces a princess who has never been known to smile to experience her first humorous moment and to laugh. This earns the lad the right (by Royal Proclamation ) to claim the princess’s hand in marriage.

Gill Hipwell has written her own particular kind of magic round this story, setting it in Lugubria, a small kingdom somewhere uncomfortably close to Alburgh, and has made another successful panto with which the members of the DVC were able to exercise their talents. Hearty congratulations to all the big cogs and all the little cogs that enmeshed so well to make this year’s panto (the DVC’s 22nd) such a success.

I saw it on Thursday, the official first night, and along with the rest of the audience I thoroughly enjoyed seeing our fellow villagers abandoning themselves with words, music and dance in order to entertain us. In my opinion, the most treasured aspect of the DVC’s panto experience is the fact that it is a VILLAGE ENTERTAINMENT where home-grown talents come together to perform for the village. Fun for all!!

It is not really fair to single out individuals from the company who gave so much but I must highlight first Gill Hipwell for her script, her invention of extra plot, extra characters and of some new lyrics to old tunes; and secondly, a special and deserved mention for Barbars Spaull’s Goldie the Goose. Conceived and made as a glove puppet it offered much potential to win our hearts.

We first-nighters were also entranced by the antics and words of Karen Dove and Peter Grant as two splendi-tickle-dacious Scarey-crows, including a highly amusing instance of Karen’s improvised dialogue to cover a “wrong-footed” moment. We all loved it! I must mention that we were all delighted by the touching duet given by Katherine Valori’s Princess and her newly-discovered and caring uncle, the High Chamberlain, played by Eddie Winter. Thanks to all who helped make our evening so entertaining; all contributors, makers, players and supporters. I look forward keenly to next year’s follow-up.

This year’s Rising Stars production was “The Emperor’s New Clothes” performed on the 29th and 30th of October.