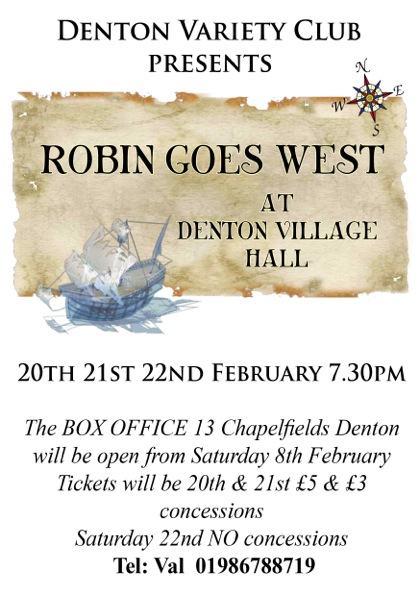 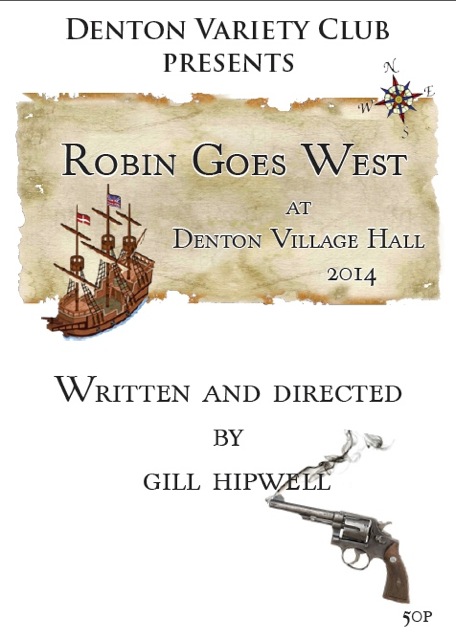 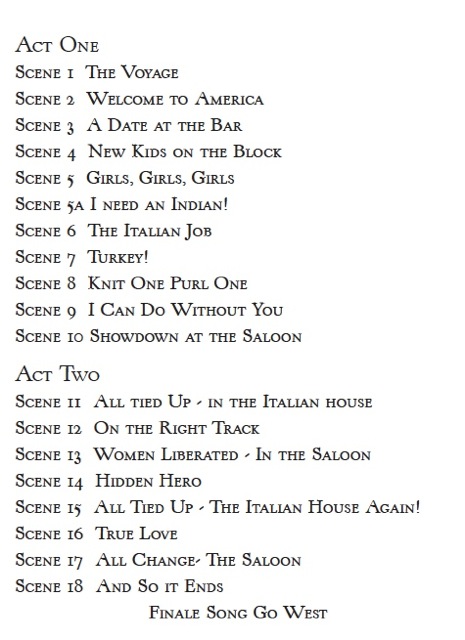 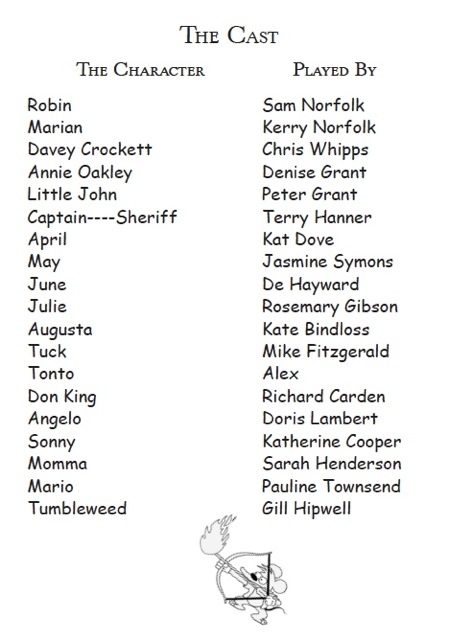 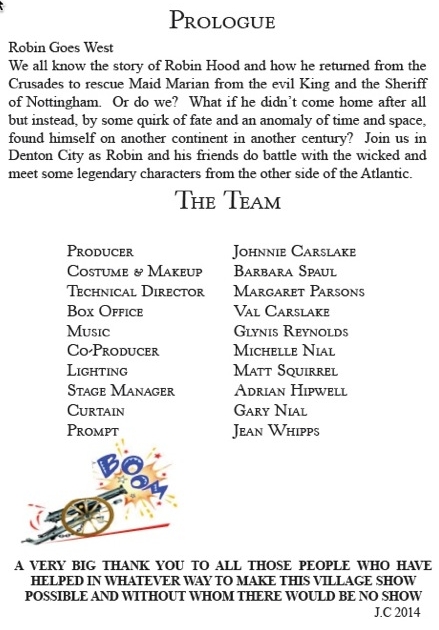 The scale of this panto was epic, with its time span stretching from the Crusades of the 12th Century to the combined Hollywood versions of the American West and the power of the Mafia as portrayed in modern times. With the aid of Denton's and Christopher Columbus's Tardis we were able to sail with Robin Hood, Friar Tuck, and Little John through Time and Space to meet up with iconic Americans such as Davy Crockett and Annie Oakley, who were each convinced "I can do without you", but we were happily convinced that the opposite was true.

It wasn't long before we saw Robin meet his true love, Marion; and then we learned that she was soon to fall prey to the orders of the local Mafia boss, with a possible forced marriage in view. However, other influences began to emerge and take charge of increasingly complicated situations until the traditional panto end arrived where everything turned out well and we were encouraged to "Together - Go West".

As in other years, this panto-type show was written and directed by Gill Hipwell, and this year we were treated to her talent as a performer as well. Bowling through some of the scenes from time to time, she appeared as the character Tumbleweed, reminiscent, I thought, of Mark Twain's Huckleberry Finn, and completely in tune with the sage-brush feel of her American setting, and always ready to lend a tuneful harmony to other wanderers in her land.

A special mention must be made of Alex Eley, who, if I am not mistaken, gave us a faithful dog last year, and this year gave us yet another faithful friend, the Indian, Tonto, who with war-like appearance was always ready to help those in need, even to the extent of supplying the very words his new friend, Friar Tuck (Mike Fitzgerald), must have been on the very verge of saying. By the way, I wonder if Tuck ever got out of his 'dress' and took up duties as the Lone Ranger!

Sam Norfolk made a convincing Robin, our stalwart hero, with a fine singing voice and confident presence, and his true love, Marion (Kerry Norfolk) gave him all the support that every heroine should do. As each heroine must experience danger we saw her tied up, helpless before the mercy of a villain, though not in the Pearl White manner - tied to a railway track before an oncoming Iron Horse - no, her bondage was bound up with a Mafioso welcome!

An interesting variation on the traditional meeting between Robin and Little John was invented for this production. The meeting took place "somewhere in Europe, conveniently close to a sea harbour" for these two men soon sorted out that they were an even match when they pitted their strengths with a contest that involved the display of closed fists and upraised fingers (no - not those ones). The proper name of this contest escapes me, but I have seen it performed on TV and in the movies. Robin, Tuck and John were welcomed aboard Captain Columbus's ship alongside a whole host of emigrants and they crossed The Pond to seek their future. A further innovation was to turn our more usual Derbyshire Little John (Peter Grant) into crusader knight/vegetarian/former matador with a demanding Spanish accent which astounded us with how many aitches it was possible to put before other letters of the alphabet. These aitches miraculously stopped when John turned to song; a remarkable achievement which I only know equalled when stammerers and stutterers lose their impediments when they sing. I wondered whether John might have benefited by being called Juan (pronounced Hwan) because of potential jokes about Little(h)one! But maybe all that was rejected at an early stage.

The show benefited this year with a succession of short-length scenes, keeping the pace moving and the interest of the audience up to a high level.

With no Sheriff of Nottingham (England) to frustrate our worthy hero, we were instead treated to the Sheriff of Denton (America) - Terry Hanner - complete with traditional entrance cheer from the audience. This soft-centred lawman was no Gary Cooper. He turned out to be the pawn of his King, the Mafia Don, but this Sheriff was eventually to gain our sympathy when we learned that he was "Born Under A Wanderin' Star". And when it was discovered that his six-shooter contained no bullets a member of our Friday-night audience quipped that he was only firing blanks! Yet more sympathy amongst gales of laughter. Well done that man!

Before I get to the so-called villains, I must make mention of the Saloon Girls (Kat Dove, Jasmine Symonds, De Hayward, Rosemary Gibson, and Kate Bindloss) a worthy bunch of DVC stalwarts who had first to show us the puritanical atmosphere that prohibition would produce, and later the greater freedom of the Western Saloon that we all know and love. Our Audience Wit from somewhere near the back row mentioned that the beer "had a good head on it". As well as good humour this man must be blessed with extremely good eyesight!!

Now to the Godfather, Don King (Richard Carden), dressed in villainous black with a hairpiece to match (you couldn't see the join!) and an Italian accent you could cut with a dolce-latte knife ! He was ably supported by his two henchmen, Angelo and Mario (Doris Lambert and Pauline Townsend) who gave us committed and convincing representations of Mafia threat whilst retaining panto-humour. It wasn't long before we realised this Mafia Don was securely under the thumb of his pasta-making, Mary Berry-Matriarch, his Mamma-Mia (Sarah Henderson). She soon organised life, both at home and in the saloon, to the benefit of all.

The square peg-in-a-round hole character of Sonny, the work-experience lad in the Mafia household, was enthusiastically presented to us by Katherine Cooper. Sonny, previously dominated by his mother's tenets in life, slowly comes to realise that success can be found by following his dream, and he turns from a potential life of crime to gaining a position of work on Little Juan's ranch. No doubt he will be found caring for an orchard of Denton cyder apples, but - Juan, be warned, don't give him an axe! He has confessed his name is George Washington, and his mother always said "Don't tell a lie!"

There remain two actors I have so far not mentioned, Denise Grant and Chris Whipps. They have always, it seems, given of their utmost in previous productions, and this year's was no exception. Playing Annie Oakley and Davy Crockett as a double-act who, subsequently, meet up with the show's other characters, they gave us excellent teamwork and comedy throughout all of their scenes, and it was a pleasure to enjoy their performances. Good dialogue, well delivered, with the bonus of an economy of movement, they effectively entertained us.

One suggestion I would like to offer for next year is that it might be a good idea to list the songs in the programme. There was a good selection this year and it would be nice to recall them to mind from a list.

The only carp I have, and I offer it as constructive criticism, is that the village hall stage can be like a wooden drum. Performers should be aware their footfalls are like timpani thuds, and all excessive movement and fidgeting should be thought about and controlled. Footwear is as important to get right as the rest of the costume.

All production team members deserve praise for each one's contribution. The show ran smoothly, looked good, and sounded good. I congratulate you all.

Denton Variety Club did it again ! An evening of ENTERTAINMENT.