This year’s adult production was “Quasimodo’s Back”, a “love story set in Paris” performed on the 17th, 18th and 19th February. 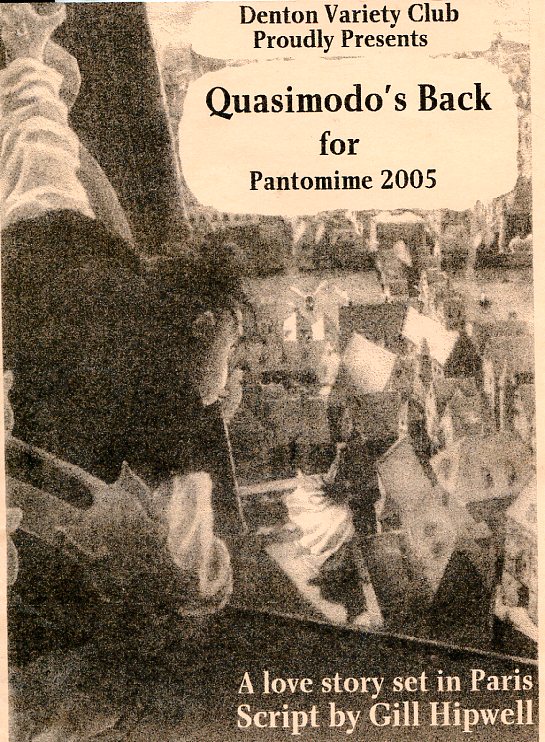 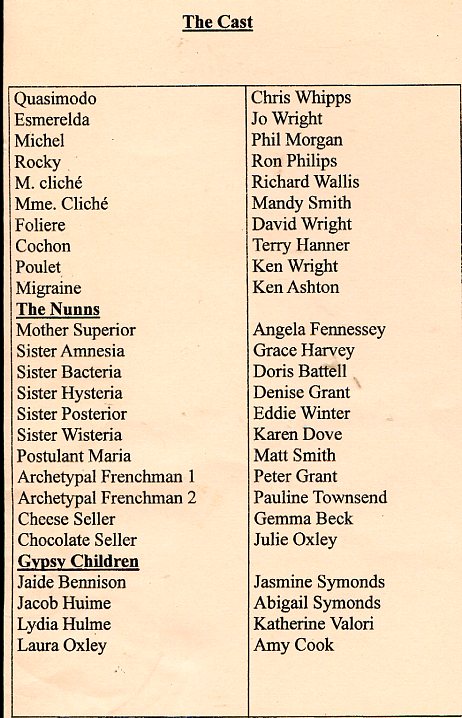 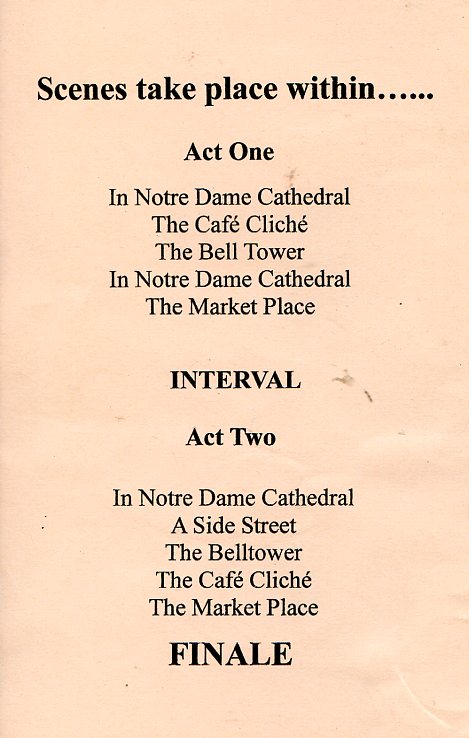 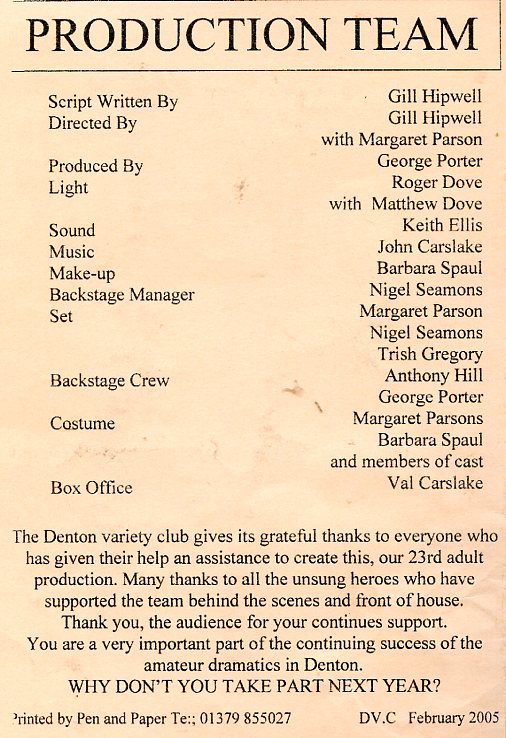 From the Parish Magazine, April 2005

What a night at the Denton Village Hall, transformed into Paris, for a pantomime with a difference. Once again the DVC did us proud with an outstanding production imaginatively written and directed by Gill Hipwell.

Set in the Paris of Victor Hugo, mainly in Notre Dame Cathedral and The Café Cliché, it was a love story based on Quasimodo, well portrayed by Chris Whipps, and Esmerelda, sensitively played by Jo Wright.

The scenery skillfully painted by Trisha Gregory, Nigel Seamon's work on the stained glass window and the two incredible gargoyles created by Barbara Spaul could have graced any professional pantomime stage.

Along our row the laughter had tears streaming down our cheeks. Karen Dove, as Sister Wisteria, had us chuckling with her expressions before the words had the tears rolling. Denise Grant, as Sister Hysteria, had us hysterical with laughter. All the Nuns were excellent, one highlight being their energetic rendition of ''Sisters''. It was also fitting that Sister Amnesia forgot her lines at one point!

It wouldn't be the same without the series of little blunders that get the audience participating and creates a fantastic atmosphere, all too often missing in today's TV, video and computer world.

All the traditional pantomime ingredients were there. The baddie, convincingly played by David Wright, had both children and adults hissing and booing with vigour. The man playing a woman could not have been bettered, with Matt Smith as the postulant nun Maria. His acting and, particularly, singing had the balance of quality and comedy that had us in stitches.

The clever use of cliché script for M. and Mme. Cliché was a gem, difficult, but well handled by Mandy Smith and Richard Wallis. The surprise at the end, when Inspector Migraine takes off his disguise and is revealed as the hero, the bumbling and hapless duo of soldiers and then the younger members of the cast delighting us with both their acting and singing. The continuity acts allowing the scene changes to take place, ably performed by Peter Grant and Pauline Townsend, were varied and entertaining.

While commenting on the actors, we must not overlook the invaluable contribution made to a successful performance by the whole team directed by George Porter. Music man, John Carslake, keeping us in the mood, the lighting, sound, make up, costume, set construction, backstage crew, box office and all the unseen tasks are just as important. All are to be congratulated for a wonderful evening of real enjoyment and entertainment. A truly family event both on the stage and in the audience.

On behalf of all the audiences who enjoyed this year’s pantomime can I say a very big thank you to all those who took part in the production and those who supported them.

We look forward with anticipation to the 24th pantomime next year.

This year’s Rising Stars production was “A Christmas Carol” performed on the 2nd and 3rd of December. 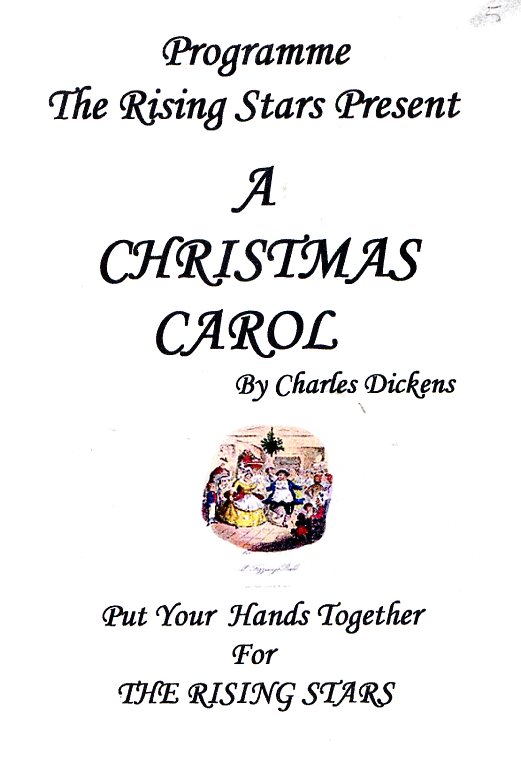 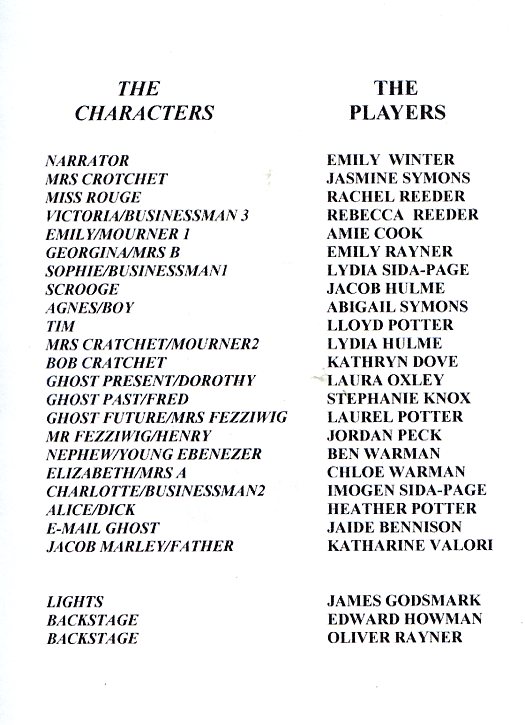 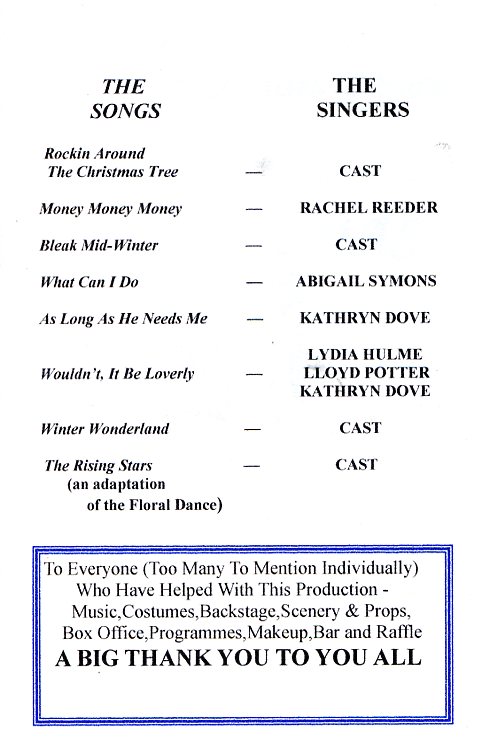 What Stars ‘The Rising Stars’ Were!

From the Parish Magazine, January 2006.

The youngsters really lived up to their name in their production of ‘A Christmas Carol’ at Denton Village Hall. With over 30 characters being played and lots of scenery changes it was a brilliant display of the talent our young people have today. First night nerves were soon overcome and apart from some prompting here and there the story fairly romped along. With subtle links between the Charles Dickens version and up-to-date issues concerning schools it was a colourful and lively performance. The second half really got going with some superb singing by the cast and by the end of the evening they had all the audience singing along.

To put on a production like this it takes huge commitment from all the cast and let’s not forget the back-stage crew who did a magnificent job. Nigel and Roger, unable to help due to ill health were sorely missed, but their stand-ins were excellent and deserve a special mention. Above all Denise and Angela did a fantastic job of encouraging and directing the youngsters to put on such a performance.

A huge ‘WELL DONE’ to everyone who was involved.