This year’s "adult" production was “Beauty and the Beast” performed on the 19th, 20th and 21st February. 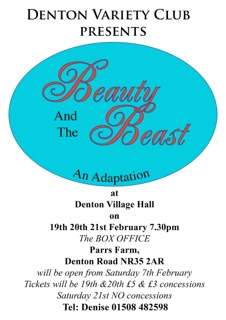 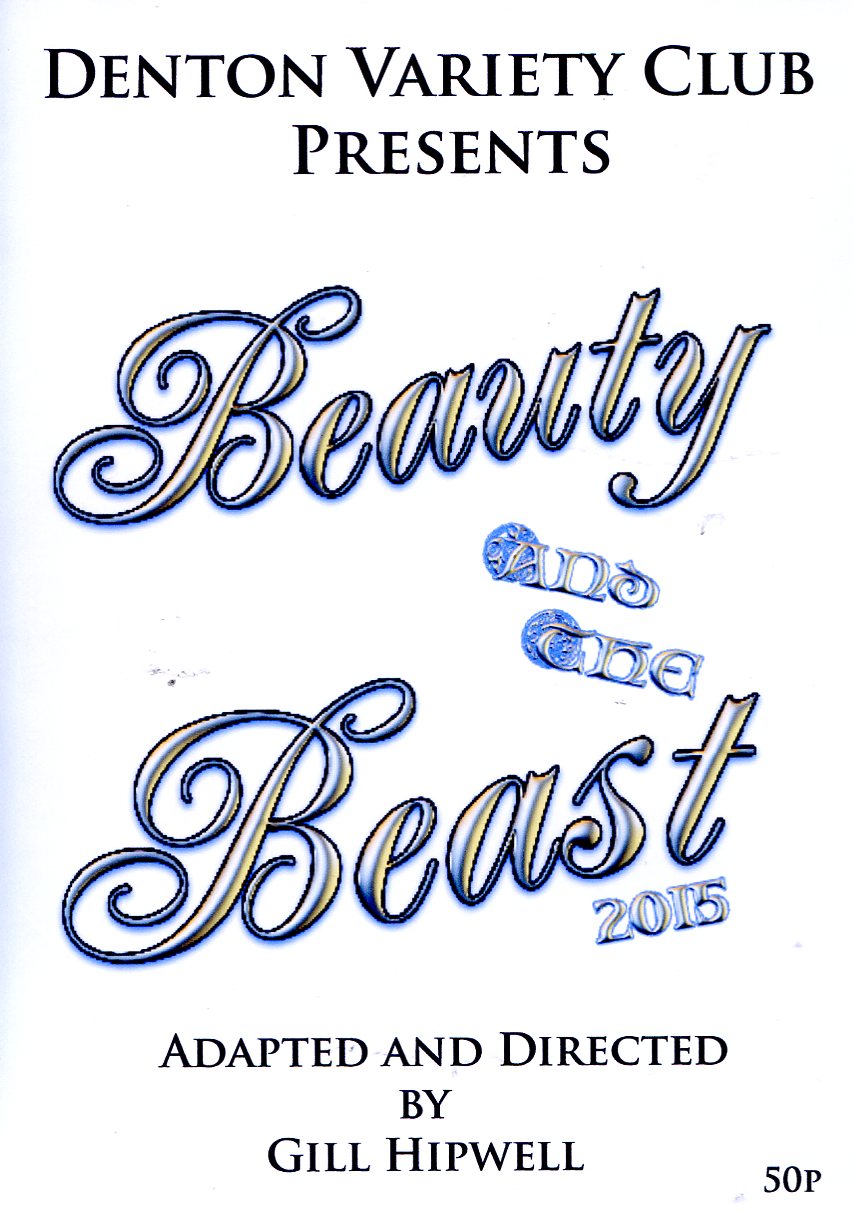 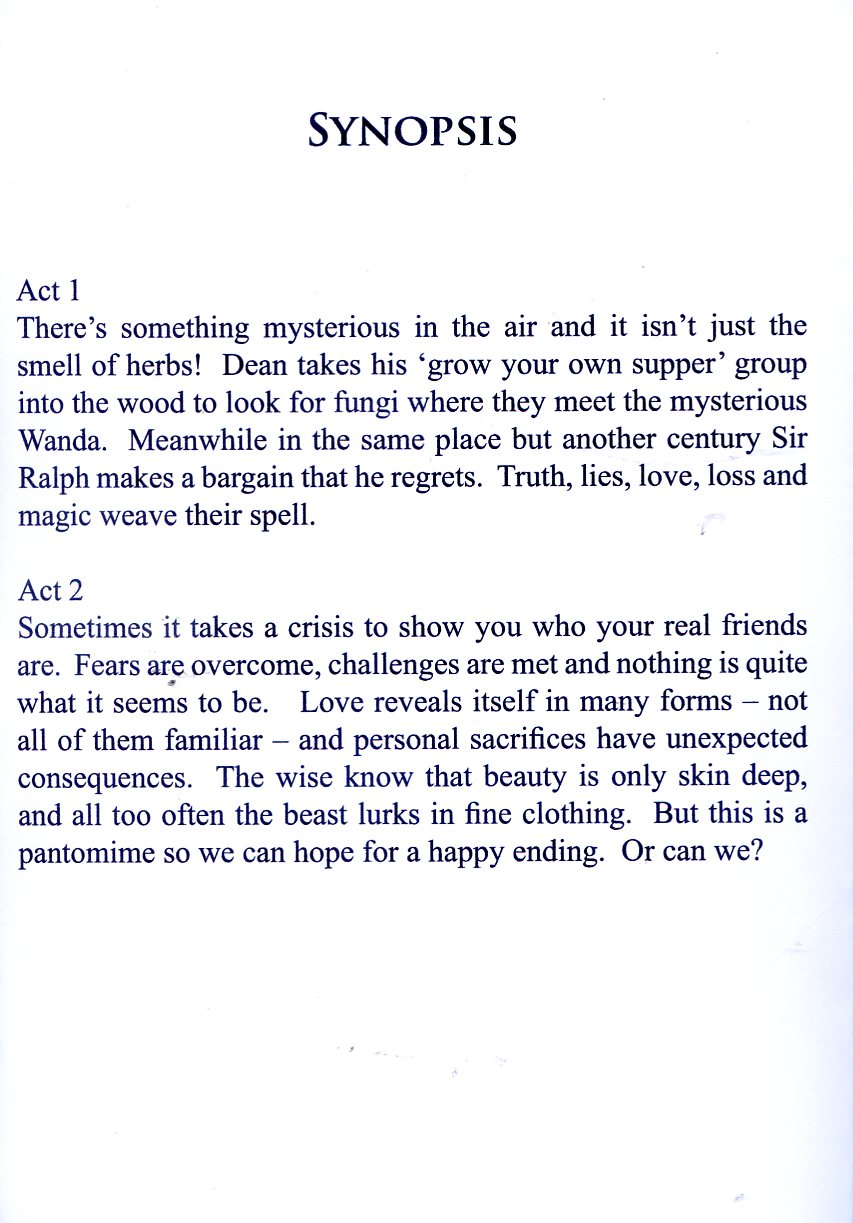 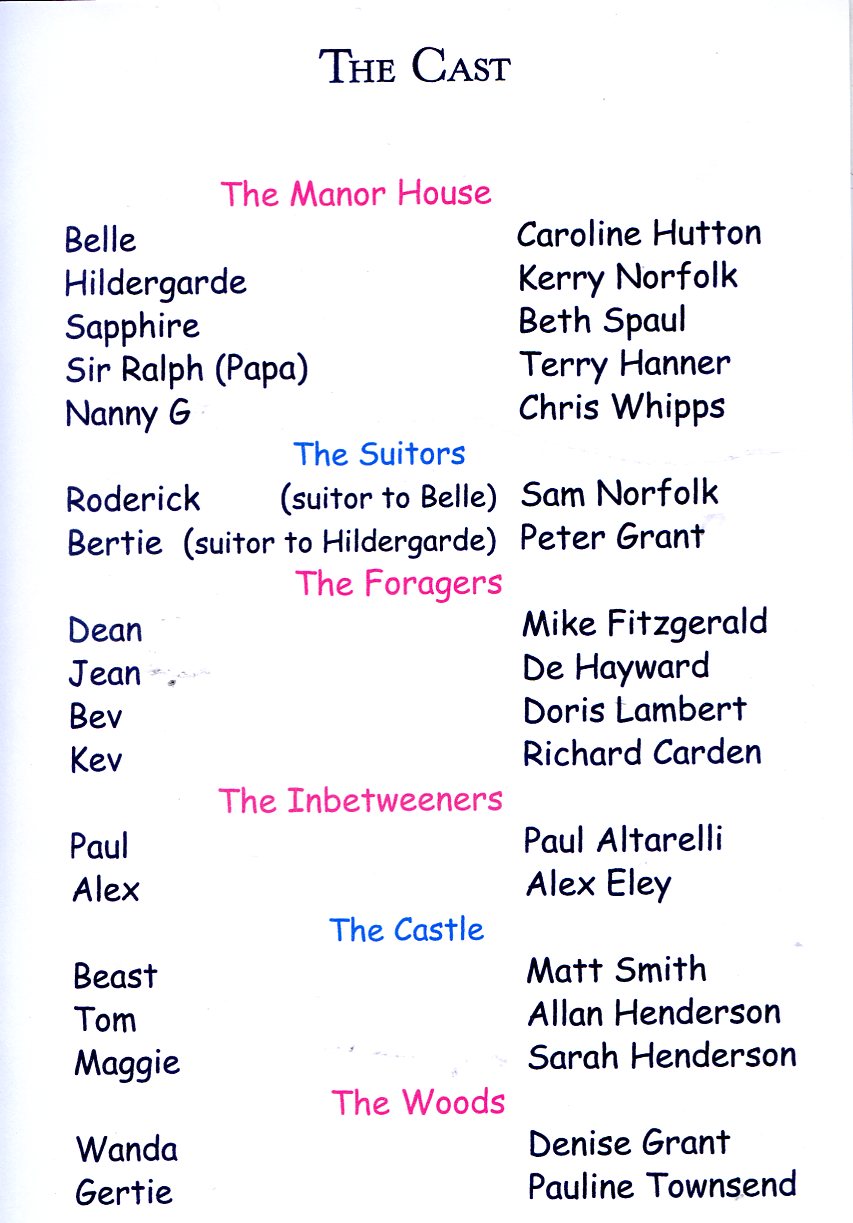 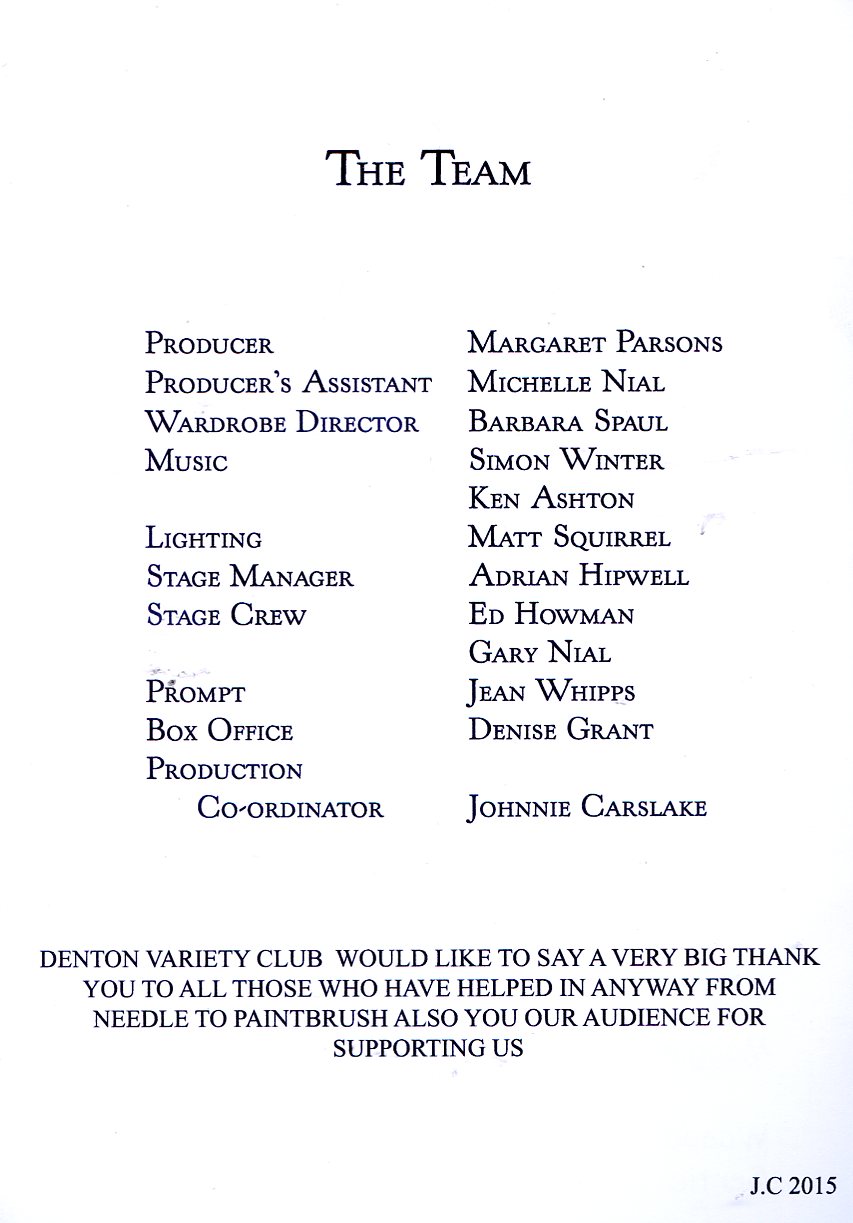 “Beauty and the Beast” is a fairy tale to teach us, like all good tales of the faery world, that beauty can hide within the ugliest of forms and natures, and, with the support of true love, such beauty can be encouraged to manifest itself to the benefit of all around it.

So, with Gill Hipwell's adaptation of the story as this year's pantomime, we are shown that Beauty, or Belle (Caroline Hutton) through her love of the monstrous Beast, or Valiant (Matt Smith) can erode the power of the spell placed upon the young man, a spell which has turned his arrogance and self-importance into the outward vision of ugliness and heartlessness, and that she can transform this Beast into a thing of Beauty.

However, Gill's panto doesn't stop there. She wants us to realise that this age-old story is still relevant in the world of today, and so we have a parallel set of modern characters, one of whom, Dean (Mike Fitzgerald), shows his particular form of arrogance and is transformed into the physical ass he has shown himself to be by the long-lived Spirit of the Magic Wood, Wanda (Denise Grant), the same Spirit who had transformed Valiant hundreds of years before. Dean's folly is only redeemed by the love of a good woman, Jean (De Hayward).

How many other Beasts, one wonders, had been the victims of Wanda's wand in the intervening years, and, because history has a habit of repeating itself, we should all take note and try to ensure that we ourselves do not become the Beast.

Other potential Beasts were evident in Gill's play, namely Sapphire (Beth Spaul) a dangerously selfish sister to Belle, and Roderick (Sam Norfolk) a self-important, cowardly narcissist. These two characters seemed not to learn the important lessons presented to them and were destined to plague each other in their future life together.

However, we were shown by the selfless and courageous characters, Hildergarde (Kerry Norfolk) and Bertie (Peter Grant) how true love can be its own reward. This, too, was reflected by the loving devotion of the Beast's servants, Maggie (Sarah Henderson) and Tom (Allan Henderson).

These characters all gave us, the audience, the necessary Panto “Ahhh!” factor. So, too, did Terry Hanner's kindly portrayal of Sir Ralph, Belle's father, and Chris Whipps' Nanny G, always ready to defend her “chickens” with a well-aimed prod of her umbrella, or bring the comfort of food to all who tasted her “toad in the hole”. Chris's was the role of laughter-maker, the Dame, and he was ably assisted at one moment by a well-handled dancing string of sausages as Nanny bravely sang “Whistle a Happy Tune”.

I wonder if, one year, someone on the creative stage design team will treat us to a “woofen-poof”? (See me, Gill, if you don't know to what I am referring.) I remember well from previous years when long-wave UV lighting was used to spectacular effect in the village hall panto and would love to see its inclusion again in the future, especially for those moments of “magic”.

I have not yet mentioned some of the stalwart acting members of the DVC who, every year, add their own particular brand of performance to add firm buttresses to the whole evening's entertainment. Doris Lambert and Richard Carden, who gave us Bev and Kev. This was a duo designed to provide comedy by Kev's empty-headed attention to whatever was happening around him (unless it was a plate of chips), and Bev's more practical assessment and control over her friend's follies.

Paul Altarelli and Alex Eley added their enthusiasm for whatever situation the characters found themselves in, and it was charming to see Paul's polite lifting of his hat to acknowledge the pleasure of the audience each time he and his companion traversed the stage.

Now I come to the performance which, for me, nearly stole the show. Pauline Townsend gave us Gertie, the somewhat put-upon, long-suffering, general factotum and herb-gathering assistant to Wanda. Ever trying, unsuccessfully, to warn people for their own good not to upset her mistress, she showed a sense of comedy which paid dividends, and, by her quiet, unforceful performance, had us creased with laughter.

My congratulations for some well-chosen songs, delightfully rendered, and to all in the show, including the musicians, Simon and Ken; to those responsible for the choice and colour of the costumes and settings – even the creation of the grey gargoyles at the entrance to the castle; and to all the front and back stage staff. Without any one of them the show would be the poorer.

Laughter ruled on the night I attended (Friday). Some was by design, but a lot was by the “accidents” which befall a village panto. In my opinion, such spontaneous humour only enriches the evening's entertainment. It doesn't really matter when people forget their next line, or lose the tune, or have to cope with the odd line thrown at them by the audience. These are the things that Denton Variety Club has faced and triumphed over year after year, and it is part of what we love about the Village Panto. Long may it remain a Beauty. 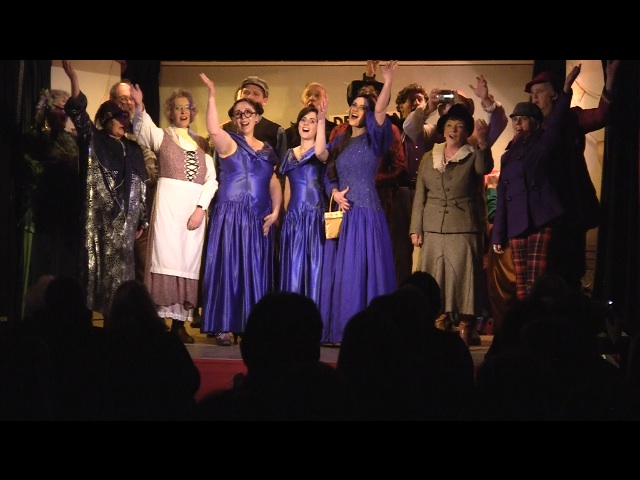 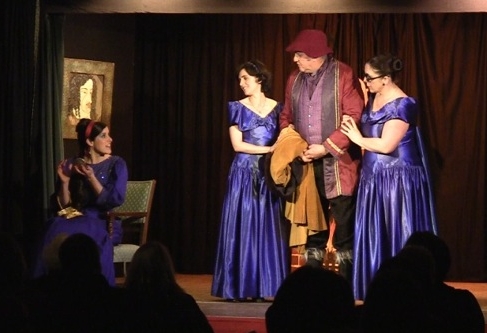 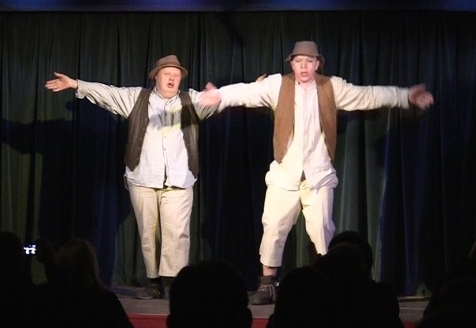 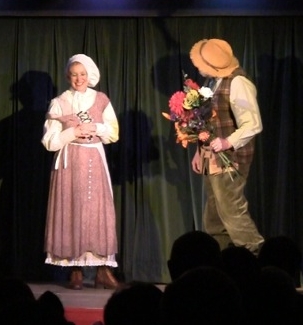 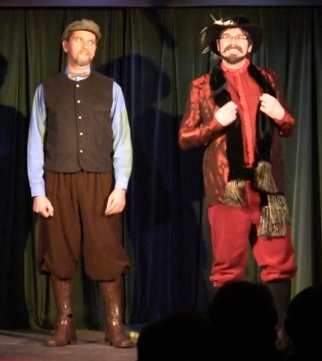 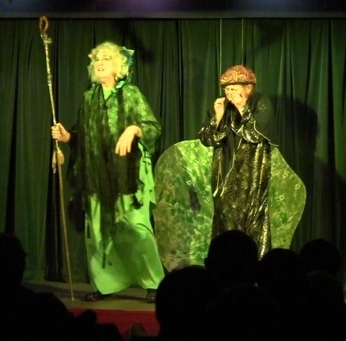 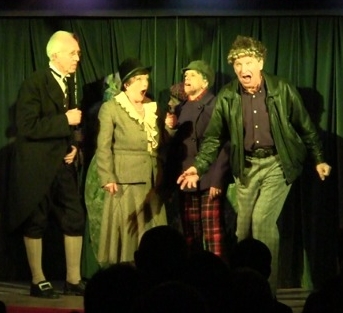 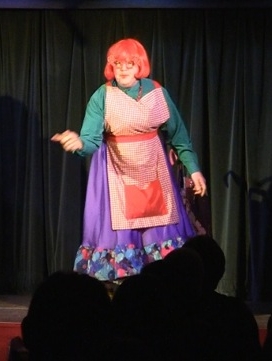 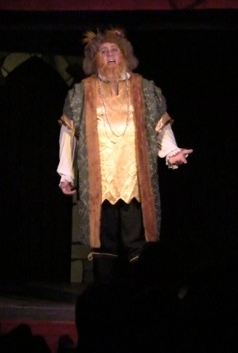 These pictures are stills from the video recording of the show by Johnnie Carslake.
Anyone wishing to purchase a copy of the DVD should contact Johnnie on - 788719. 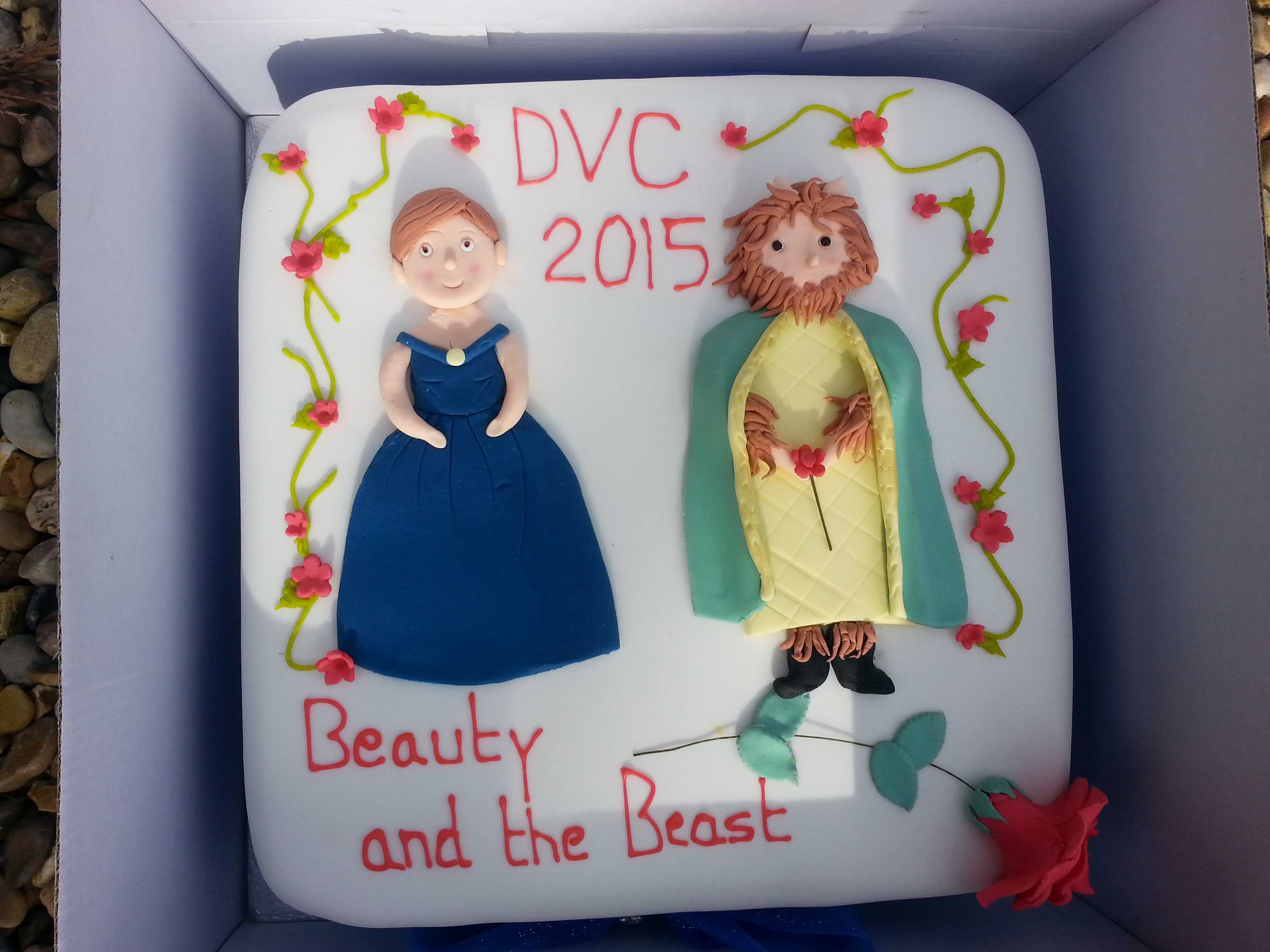 This magnificent cake was made for the cast by Sara Fox.