This year we returned to a panto theme but with an unconventional theme.
A "subtle" adaptation of Alexander Dumas' famous historical novel saw "The Three Musketeers" performed on the 16th, 17th and 18th February.

In contrast to last year, the Village Hall extension was now finished with proper heating and lighting plus a new back-stage loo. The cast enjoyed their creature comforts while retaining the great spirit of the old Garage changing-room. 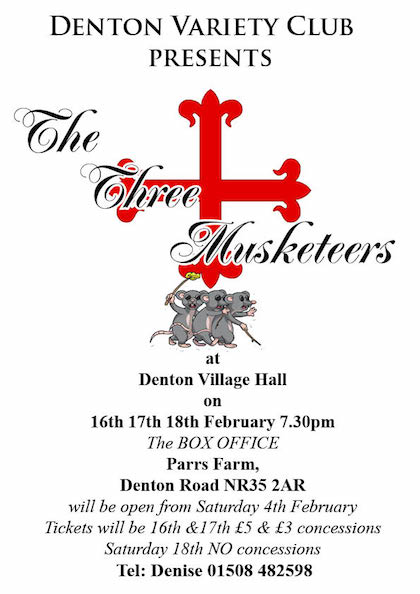 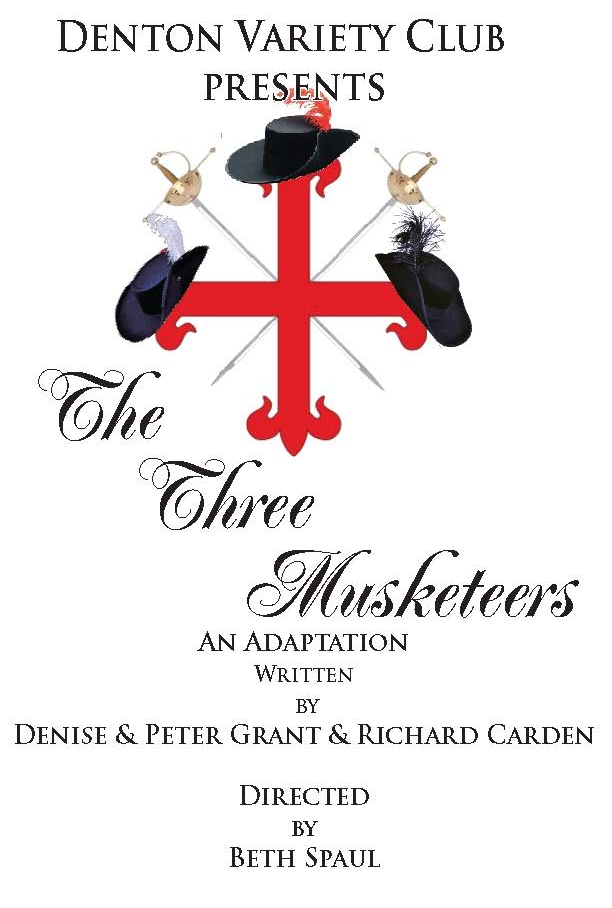 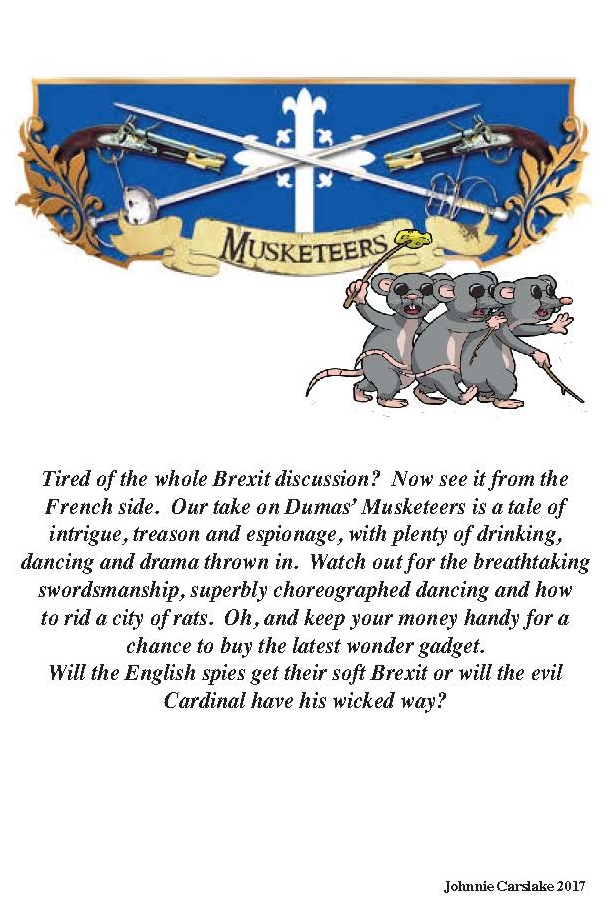 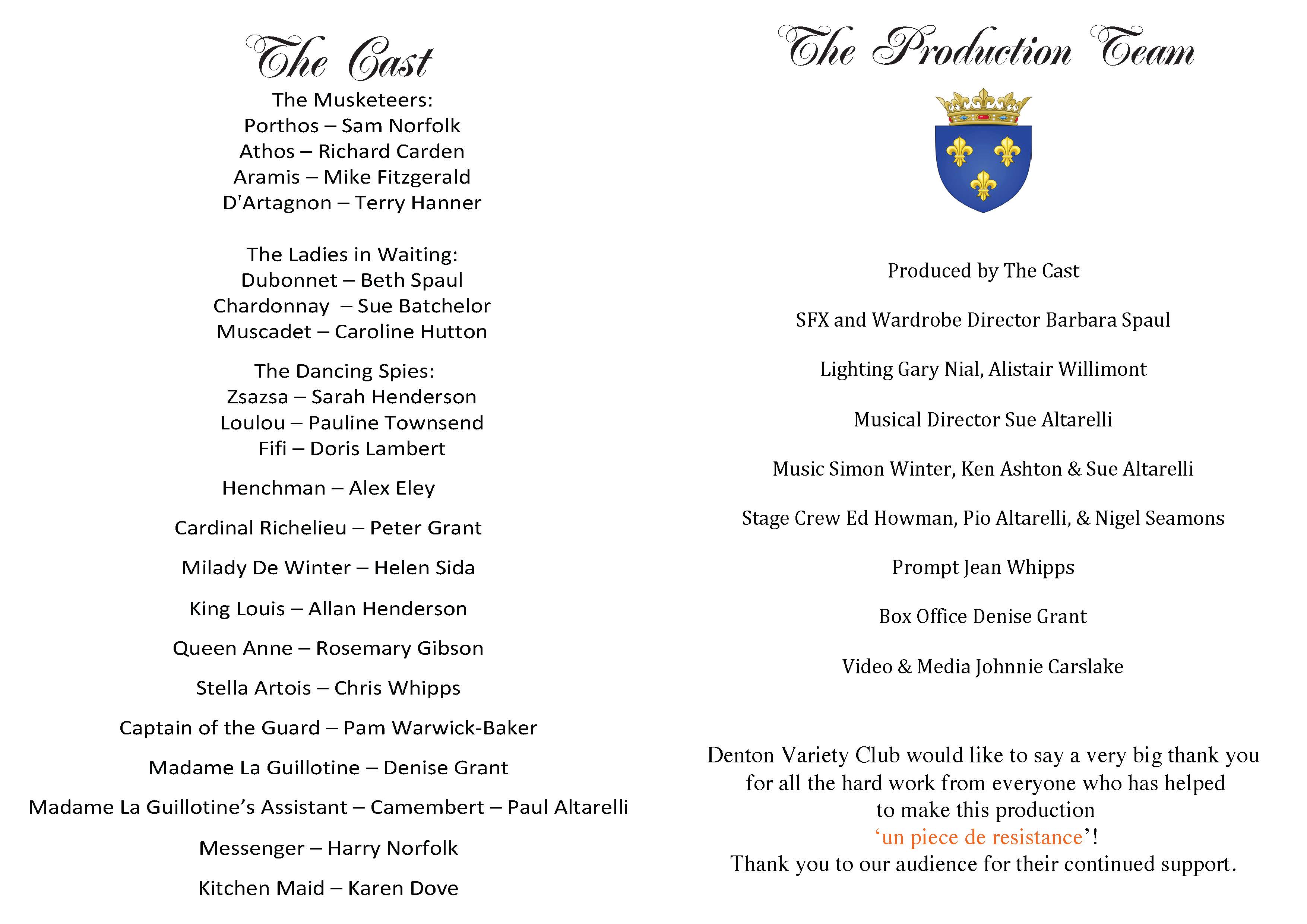 'All For One and One For All'. It's a quote that all of us, except perhaps the very young, know very well. It implies that teamwork will always win through against any odds, and Denton Variety Club's offering of the adaptation of Dumas's “The Three Musketeers” certainly pressed home the point successfully to all in the audience on the night I attended, Friday 17th.

The members of the club had combined to produce the performance of the fresh adaptation, written by Denise and Peter Grant and Richard Carden, and they had chosen one of their younger members, Beth Spaul, to direct it. Beth is no mean performer herself, as she showed by taking on one of the roles, but she demonstrated very well the extra skill required to take control of actors and lead them in the right direction to tell the story.

This particular version of the story of intrigue and honour-in-jeopardy introduced a flavour of modern times emanating from last year's Brexit vote. So we had a lively troupe of trade delegates masquerading as dancing girls (have you ever seen the “Can-Can” danced with such determination?). Our brave girls were suspected as English (spit over the shoulder after the word) spies, but they were intent on fixing the best deal they could possibly get following negotiations conducted by the not-so-clever Duke of Brexingham, a man who was constantly in danger of being found in the Queen's Arms!! Confused, are you? Do not worry; DVC has a way of making things turn out alright in the end. Both the “goodies” and the “baddies” led us all in a splendid rendition of “Those Were The Days My Friend” at the close of the story. Many other good songs and tunes, some with new words to suit the story, were sprinkled throughout and gave rise to spontaneous audience participation. You know when a Denton audience is enjoying itself!

After an overture of some of the songs we were soon to hear, played by Simon Winter, Ken Ashton, and Sue Altarelli, the curtain “rose” on the highly colourful costumes decking the characters we were about to meet and love. (Oh, yes we were!) The stage was filled with colour and dancing (where possible on such a small area) as we listened to a collection of traditional French songs and joining in with those we knew, and were introduced to the main groups of characters.

Soon we found out that not only was there intrigue and seeking-after-power at the court of King Louis, but there was also opportunity for seeking-after-jobs at the Palace.

A virile D'Artagnon, (no, not D'Artagnan – he is somebody entirely different) played by Terry Hanner, our very own local hero, sprang lightly forward ready to fill in his job-application form to join the famed Musketeers. (There was nothing on the form about being prepared to DIE for his king!). Of course, Terry wore his 'builder's pouch' no doubt to ensure all at the Palace how handy he can be, and he was soon to show us his expertise with his rapier, even subduing the flashing weapons of the Terrible Trio, Athos, Porthos, and Aramis (Richard Carden, Sam Norfolk, and Mike Fitzgerald). At this point I should say that, although DVC are sometimes up against an age problem with their male membership, we, the audience, are ready and willing to suspend our disbelief and enter into a world of storytelling that one calls “The Magic of Theatre”.

The Musketeers are ordered by their commander (Pam Warwick-Baker) to save the Queen's honour (Rosemary Gibson's) and reclaim her valuable necklace, a gift from the King via the machinations of the cardinal Richelieu, which she has foolishly parted with while in the Duke's Arms. No, not the pub on the corner, but those of her English (spit) beau. But do we believe that they can achieve their task? (Oh yes we don't!).

So, to save the day, we meet up with two groups of girl-power: one, the bunch of trade delegates, ably performed by Doris Lambert (a stalwart of DVC) who, in the character of Fifi, shows us English (no spit) business resolve and leadership, by Sarah Henderson as Zsazsa, ready to go on point at the drop of a feathered hat, and by Pauline Townsend as Loulou, keeping us all down to earth with her dry comments about the more mundane things in Life.

The second group of girls who exercise real sensible actions of honour are two of the Queen's ladies-in-waiting who are joined by another successful job-seeker, D'Artagnon's sister. (Oh yes she is!). This resourceful girl, played by the show's director, is named Dubonnet, and her two fellow ladies of honour are Chardonnay (Sue Batchelor) and Muscadet (Caroline Hutton). One would have thought that three such dependably named French 'fruits of the vine' would have attracted the attention of the Terrible Trio but it seemed they were drawn more by the vintage bouquet offered by those fore-runners of Moulin Rouge.

Now, you can't have a Panto without a Dame, so Chris Whipps stepped into the 'skirt role' with all his usual aplomb, ready to turn the Palace Kitchen into a place of excellence. Yes, another successful job-seeker! This clever cook, named Stella Artois, has two children. Who do you think they are? Yes, of course, D'Artagnon (who is always standing for the important things in life) and the resourceful Dubonnet! (Oh yes they are!!).

Now, you also can't have a Panto without a Demon King – sorry, a Cardinal Richelieu – and Peter Grant used his smooth-talking and powerful influence to oil his way into the King's trust.. We could all tell he was a rotten oeuf (spit); why couldn't the King (Allan Henderson in full-bottomed wig)? Obviously Richelieu curried favour by hitting his ball consistently into the rough when accompanying the King on an 18-hole course. (Oh yes he did!).

The Cardinal's dastardly plans were ably enacted by Milady de Winter (Helen Sida-Page) and her eager Henchman (Alex Eley). Enough poison to put any Pied Piper out of business! But, when giving voice with a song, both Helen and Peter could delight us and make us forget for a while how wicked they were.

While some of the scenes were being carefully set up behind the second curtain on the hall's stage we were introduced to and entertained by an innovative female inventor and her assistant (Denise Grant and Paul Altarelli) in the narrow front-cloth space as they tried to interest passers-by and fellow-travellers in her new invention. Sort of job-seekers, I suppose! This invention, a version of a kitchenware slicer, was named after its inventor – La Guillotine. Most potential buyers seemed not to be interested. Perhaps the sales talk was not SHARP enough. Or maybe, if our inventor had met up with a Monsieur Renault she could have interested him in a mobile hard-boiled egg slicer. After all, he might have had a good idea to improve its mobility and I'm sure Madame would have welcomed that.

How many “Knock-knock” jokes do you know? More than I do, I expect. They are all great, aren't they, for us to groan at when the punch-line is delivered. Well, we all enjoyed each appearance of young Harry Norfolk, who, after each groaning response and being asked had he a message, would give us the running-gag line in his light treble “Of course I have, I'm the Messenger!”

I have left till almost the end of this review a performance which could hardly fail to give us joy and laughter. In the kitchens of the Palace was working a maid of unusual talent. She had an ability to recognise that rats also inhabited her domain, and so she armed herself with a rat-swat. Many of these rats ran freely about the floor (an audience-delighting idea) but not always easy to see for those of us seated in the hind rows where too many heads got in the way. Gnash, gnash! When the rats were cleverly positioned on the table-top, what delight! I particularly liked the comedy with the goose and its need for the kiss-of-life. Karen Dove played the Kitchen Maid with careful comic relish, never going too far, nor scene-stealing when it would have been so easy to do, and she clowned with admirable reserve. As the Bard says, “Let not your clowns do more than is set down for them....”

To all those I haven't mentioned by name in this review but who give their time and love to the success of the show, I offer my congratulations for your contributions. I finish as I started with something to mark team success. “All For One and One For All”.

It is planned to include some pictures from the production here soon.