In recognition of the proximity of February 29th this year’s "adult" production was a revue “Denton Leaps” performed on the 18th, 19th, and 20th February.

This production saw the first use of the new extension to the Village Hall. Virtually since the creation of DVC the very limited space back-stage has been expanded during performances by using the bus garage at the south end of the Hall as a temporary changing-room. Originally, when the Community Bus Scheme was running, this required the removal of the bus for the week of the show. Except, one year this was not allowed for some reason and a large horse-box was brought in as an emergency replacement.

When the bus stopped running, in 2006, the garage eventually became the property of the Hall and things became rather easier with carpeting and even gas poultry heaters installed. However the gap between the two buildings remained with actors dashing between the two particularly in bad weather.

The replacement of the garage with a purpose-built extension to the Hall has been a dream for a long time. Now at last it has been achieved.

Construction is not yet fully complete but, as promised, the weather-proof shell was ready on time for the dress-rehearsal. Temporary, carpets, curtains, lighting and heating were rapidly installed and the new "Green Room" was ready for use. It proved to be a very cosy home for the cast, retaining the great atmosphere of the old garage but with no more dashing across the gap!

We look forward to the completion of the remaining work, a new loo is promised and a door into back-stage right, but we must thank everybody who worked to provide us with such greatly improved accommodation for this year's production. 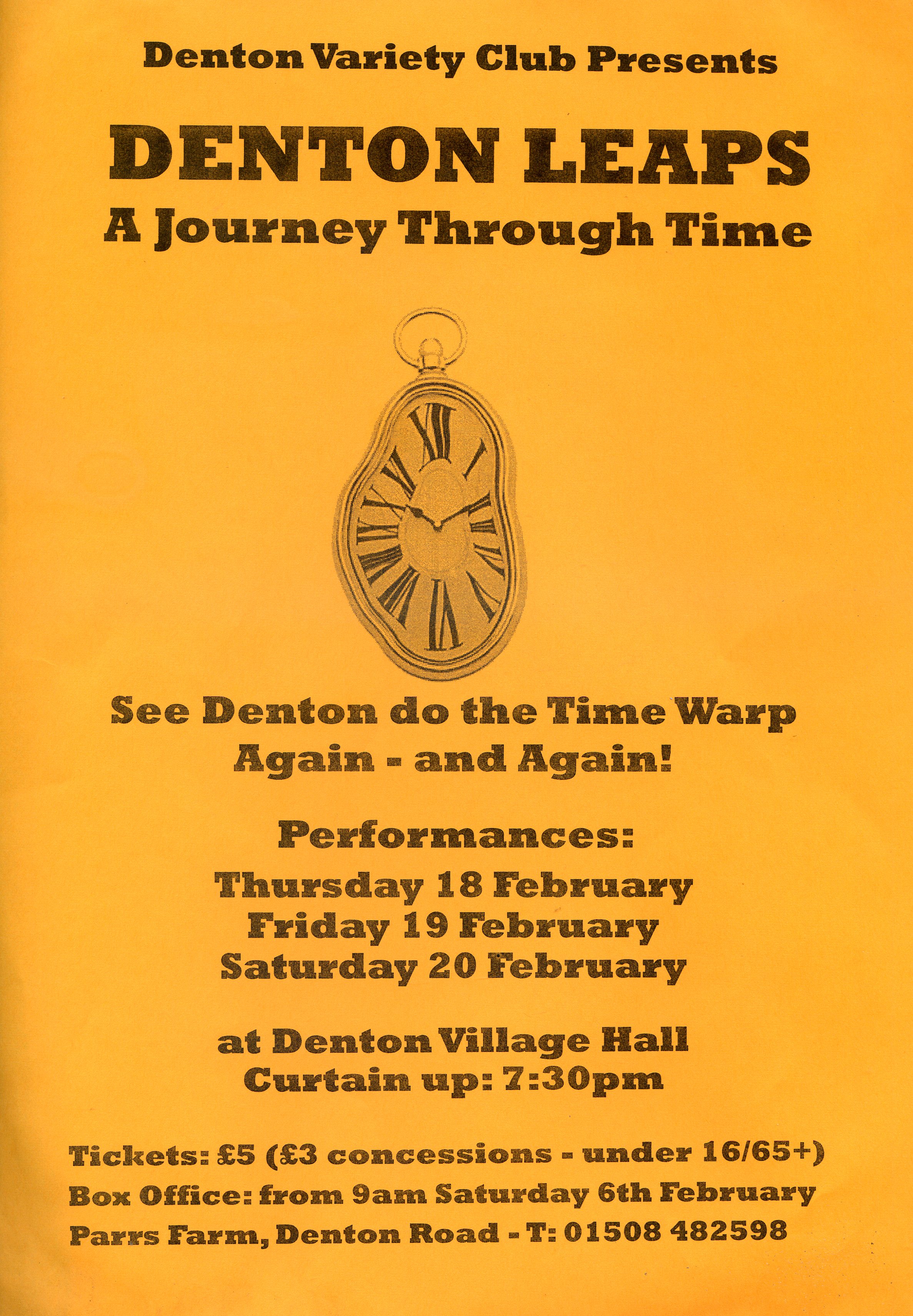 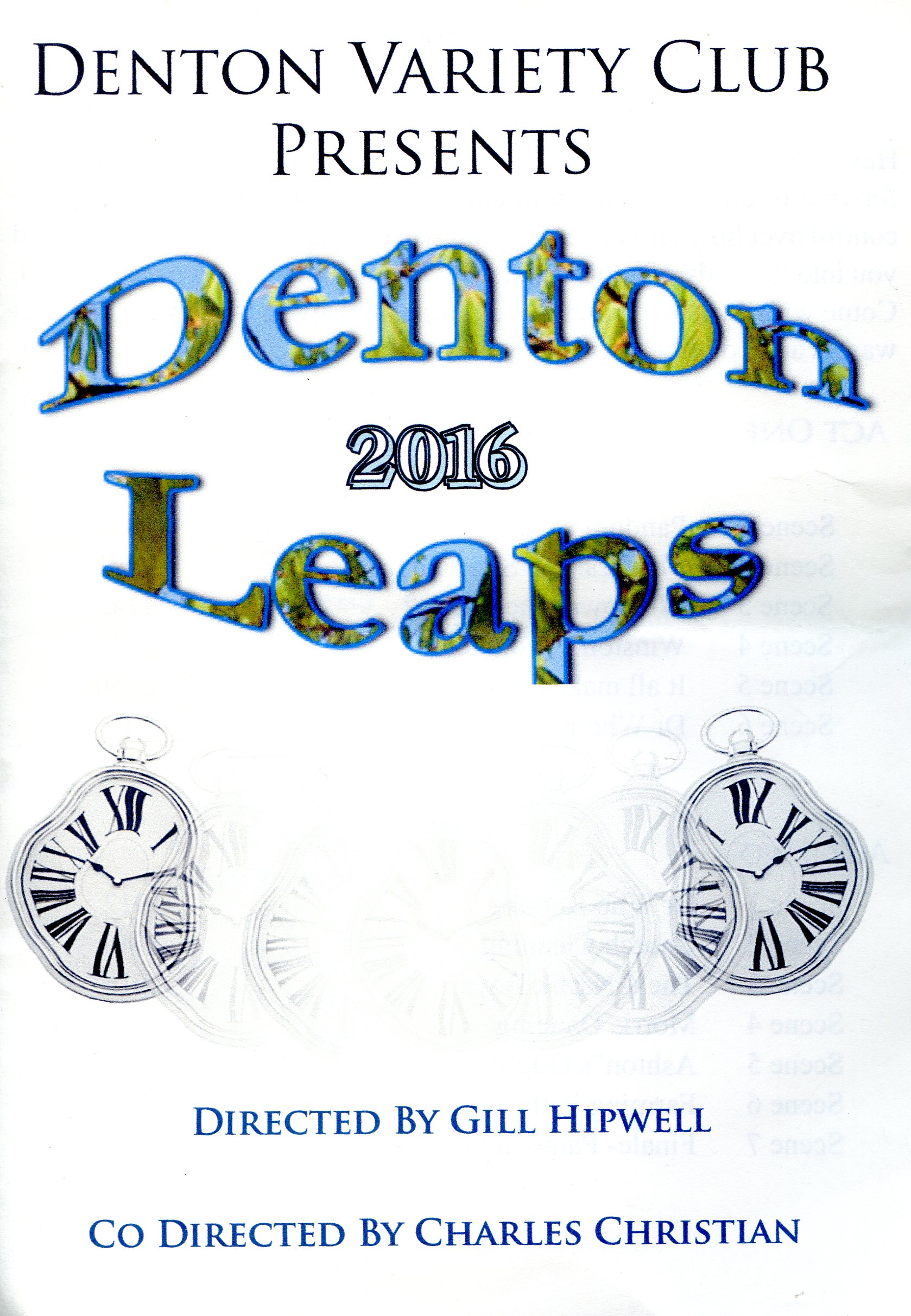 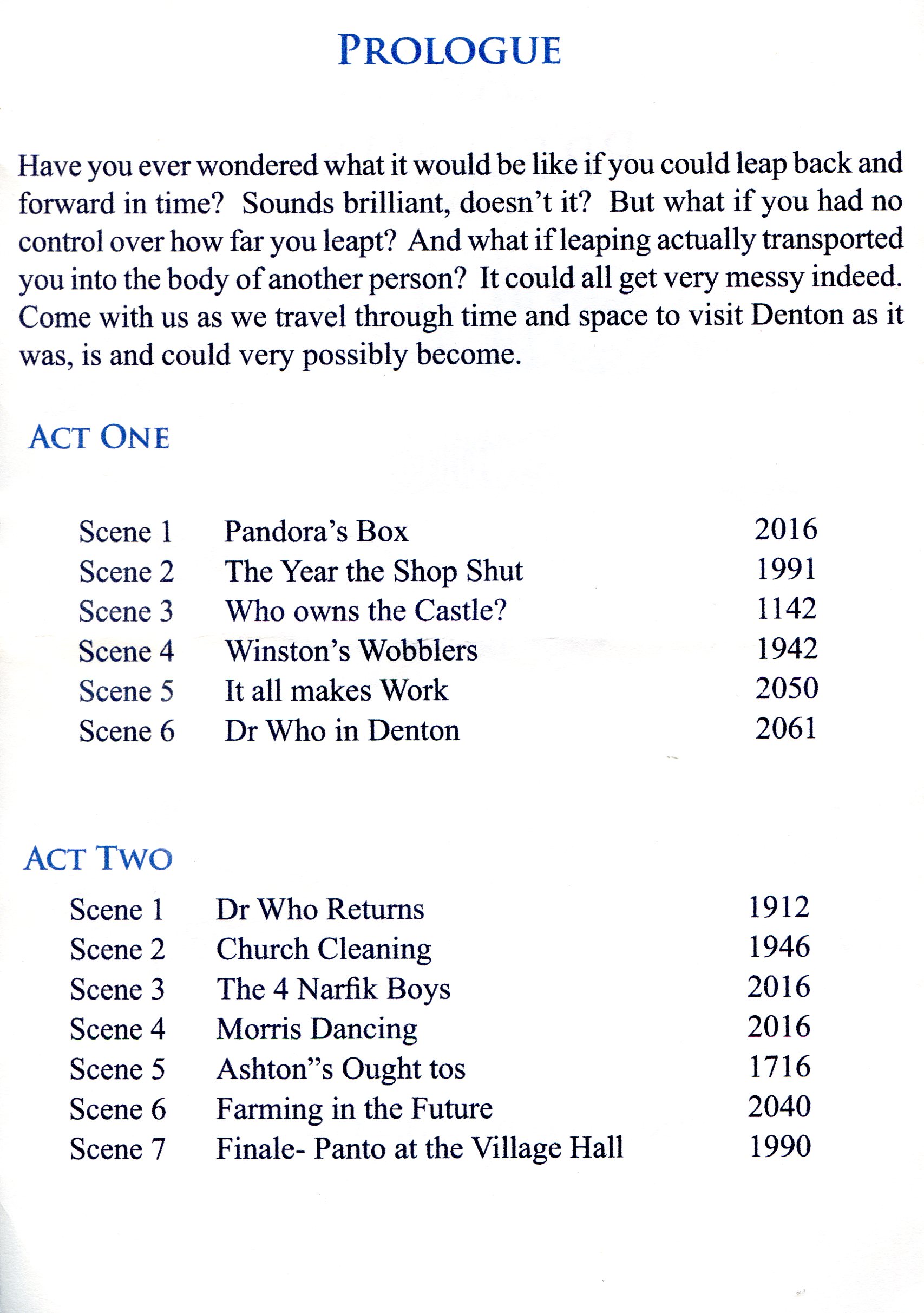 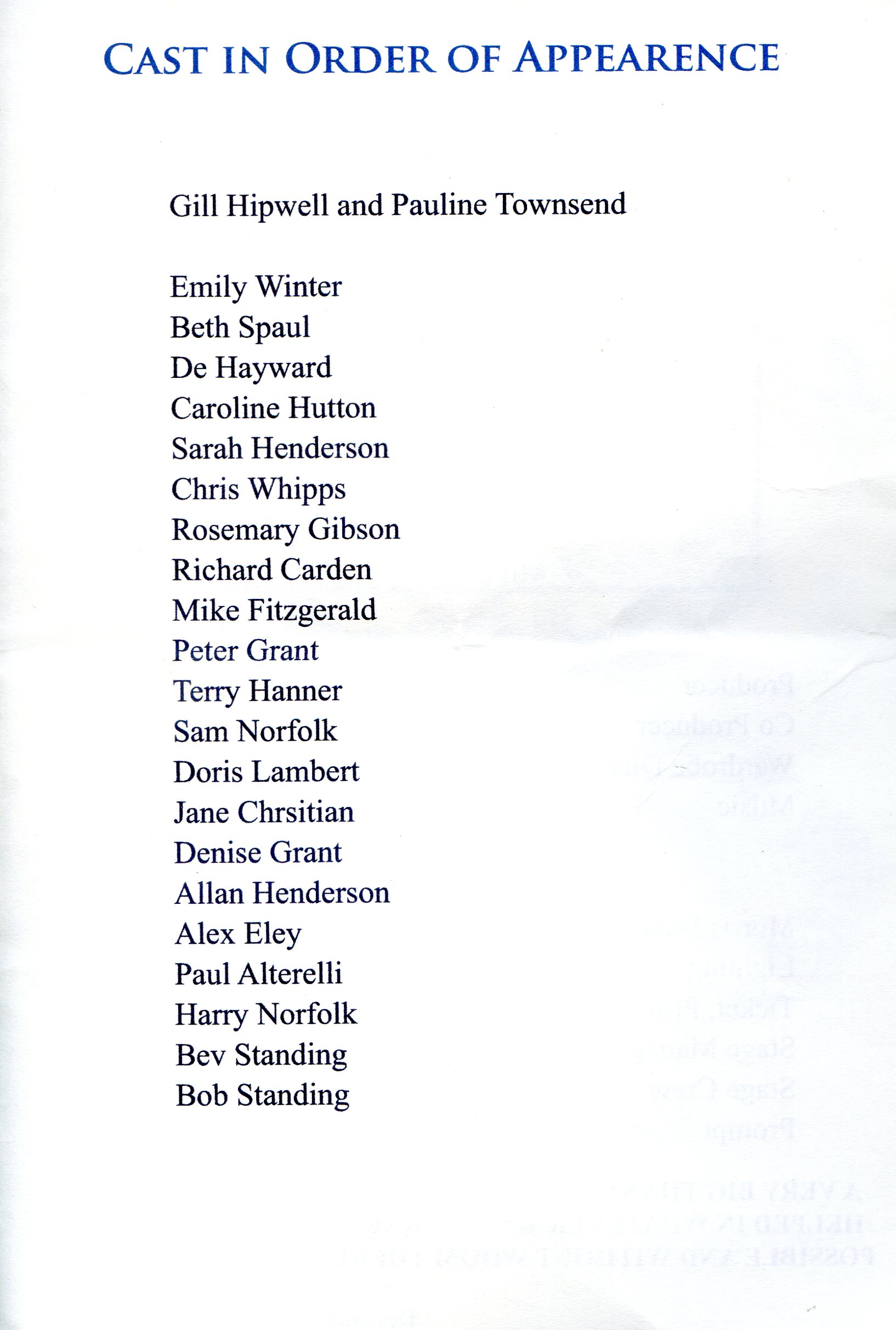 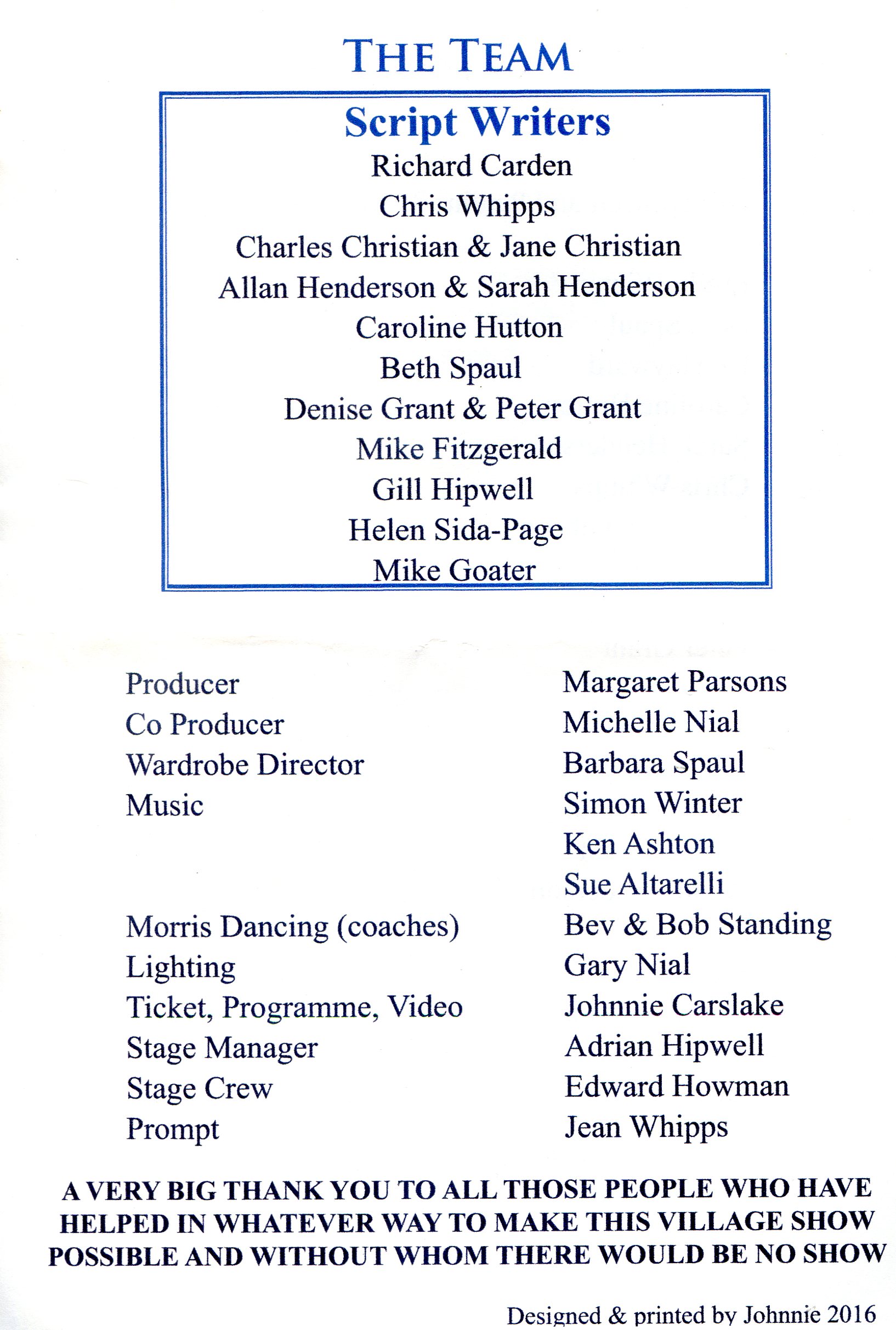 Pio Altarelli was a late, but most welcome, addition to the Stage Crew.

In this Leap Year, in place of the usual Denton Pantomime, we were presented with an entertaining collection of scenes taking place in Denton in a variety of years past, present and future. All this was achieved by the influence contained within a small Time Machine, which mysteriously turned up amongst the contents of a “dressing-up” trunk awaiting its use at one of DVC's rehearsals.

Two worthy members of the Variety Club (Pauline Townsend and Gill Hipwell) arrive at the hall for a rehearsal but find they have got either the time or the date wrong, and, consequently, are left on their own to stir up mischief in their own fun-filled way. Each experiences several times the magical properties of the Time Machine. This small version of the “Tardis” took the shape of what looked like a glittering “solitaire” suspended by a chain and was easily slipped over the head and neck to send the wearer faster than light-speed into another time but always into the same place, Denton.

These scenes, each written by one or two members of the Club, gave us some imaginative fantasies of Denton life where people would sometimes break out into song and dance for our further entertainment. Music was ably provided by a trio of players who could master a quartet of instruments: Simon Winter and Ken Ashton giving their usual keen support on keyboard and guitar, but being augmented 50% this year by Sue Altarelli on recorder. One of this worthy trio was able to provide percussion on a drum, but my position in the hall would not allow me to see whose foot kept such excellent time.

The various writers of the scenes must be praised for inventing situations and dialogue to both inform and entertain us. We should never view creative efforts lightly, but treasure the fact that someone has worked hard to be inventive. Whether you write, compose, or perform you should always be proud that you “had a go”!

It was inevitable, I suppose, that we would be reminded throughout the Time-Years of Denton's valuable assets and its irritations. Blackhand Cyder and Broadband deficiencies for instance, and it was good, too, for the audience to be able to groan with pleasure at some clever puns sprinkled through the show.

What an added pleasure it was, too, to see some relatively new faces amongst the ever-welcome favourites of the Club, demonstrating that new blood is attracted to add its talent to the group. I regret I did not know the names of some of the new players because the lack of sufficient space on the programme could afford no cast list for each scene (See below). However, I must applaud their acting with assurance, clarity, and stillness when required. One new member who perhaps stole all our hearts was very young Harry Norfolk, who performed with confidence and obviously responded very well to careful direction. If he retains a future interest in performing I hope we could look forward to bigger roles for this small but capable youngster.

Turning once again to some of the “regulars”, it was rewarding to see them tackling and obviously thoroughly enjoying a variety of roles with gusto, and coming to grips with different sorts of personality. I particularly liked De Hayward's Home Guard Captain, asserting 'his' authority where necessary, Doris Lambert's saucily playful Good Fairy, and Denise Grant certainly enjoyed herself with her 18th Century country “pessimistic character with the crab-apple face” (ably assisted by the aforesaid young Norfolk).

The gentlemen stalwarts gave us the kind of well-loved presentations that we have come to expect as in previous years' pantos; heros to cheer, villains to boo; even grandads to recognise ! Now this brings me to the Finale of the “Leaps”. It was dated in the programme as representing the year 1990, but I am afraid the reference was lost on me. However, what I did get out of what appeared to be a “walk-down of the company” was a delightful array of characters and colourful costumes bringing to mind the joys of previous Pantos.

Last but by no means least, the whole production team deserve our thanks for all their care and hard work “leaping” into action and maintaining this year's entertainment at Denton.

The Writers and Performers

With so many sketches and so many roles (congratulations must go to Barbara Spaul for producing no less than 87 costumes!) it was impossible to find space in the programme for all the credits. This omission is corrected below.

As usual with DVC productions, some of the original scripts were modified (even "improved" in some cases?) by the directors and/or the cast during rehearsal. 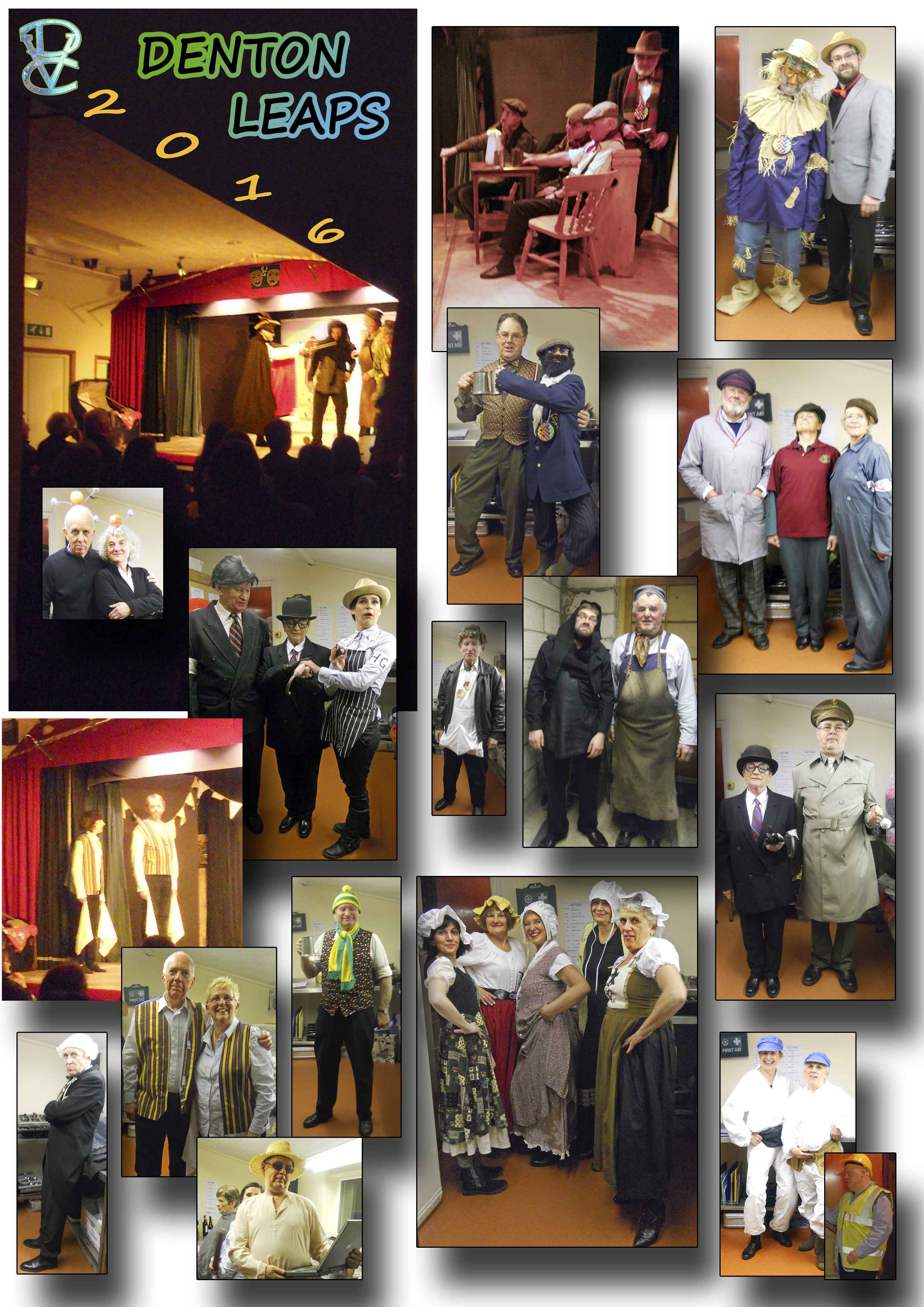 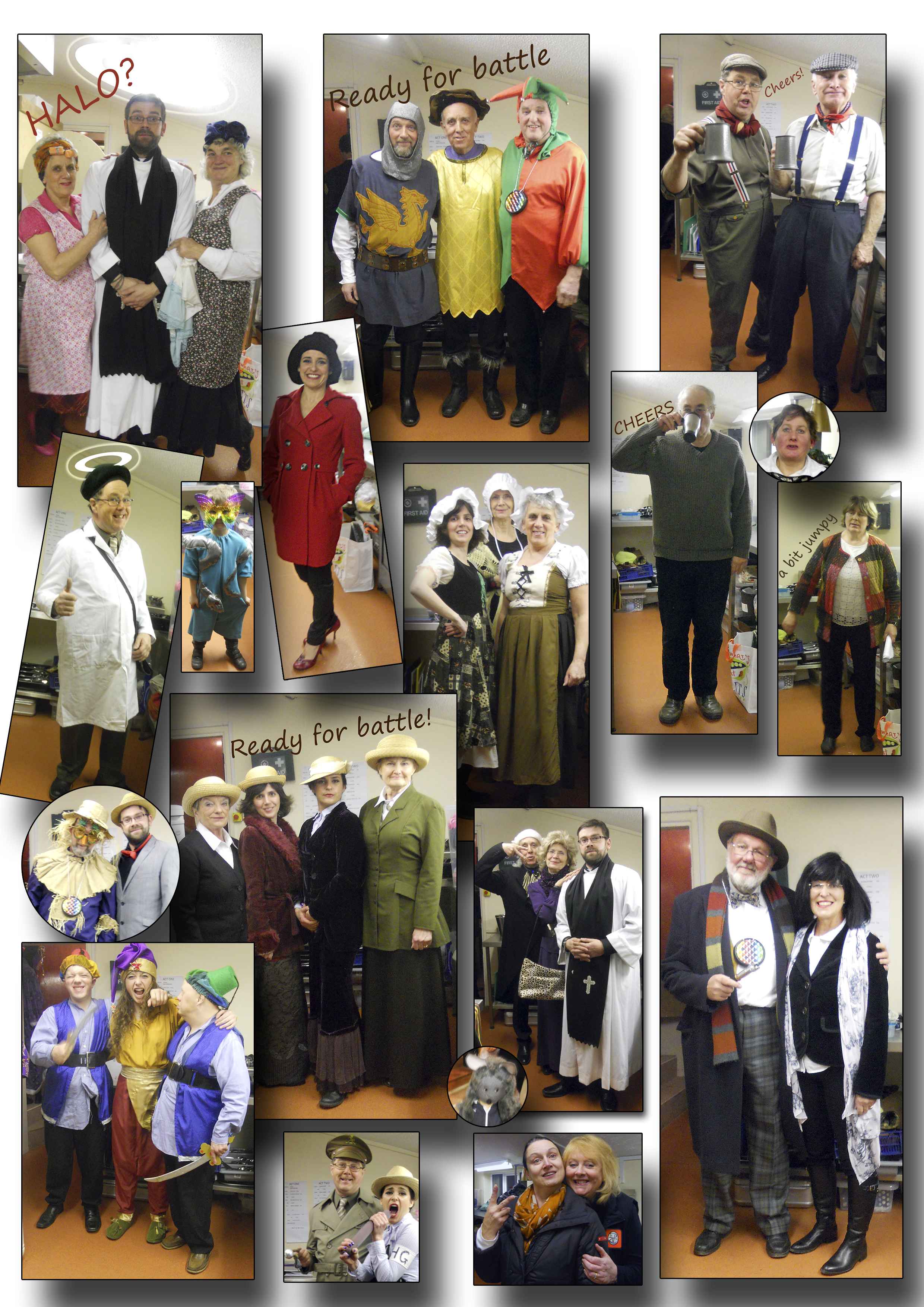 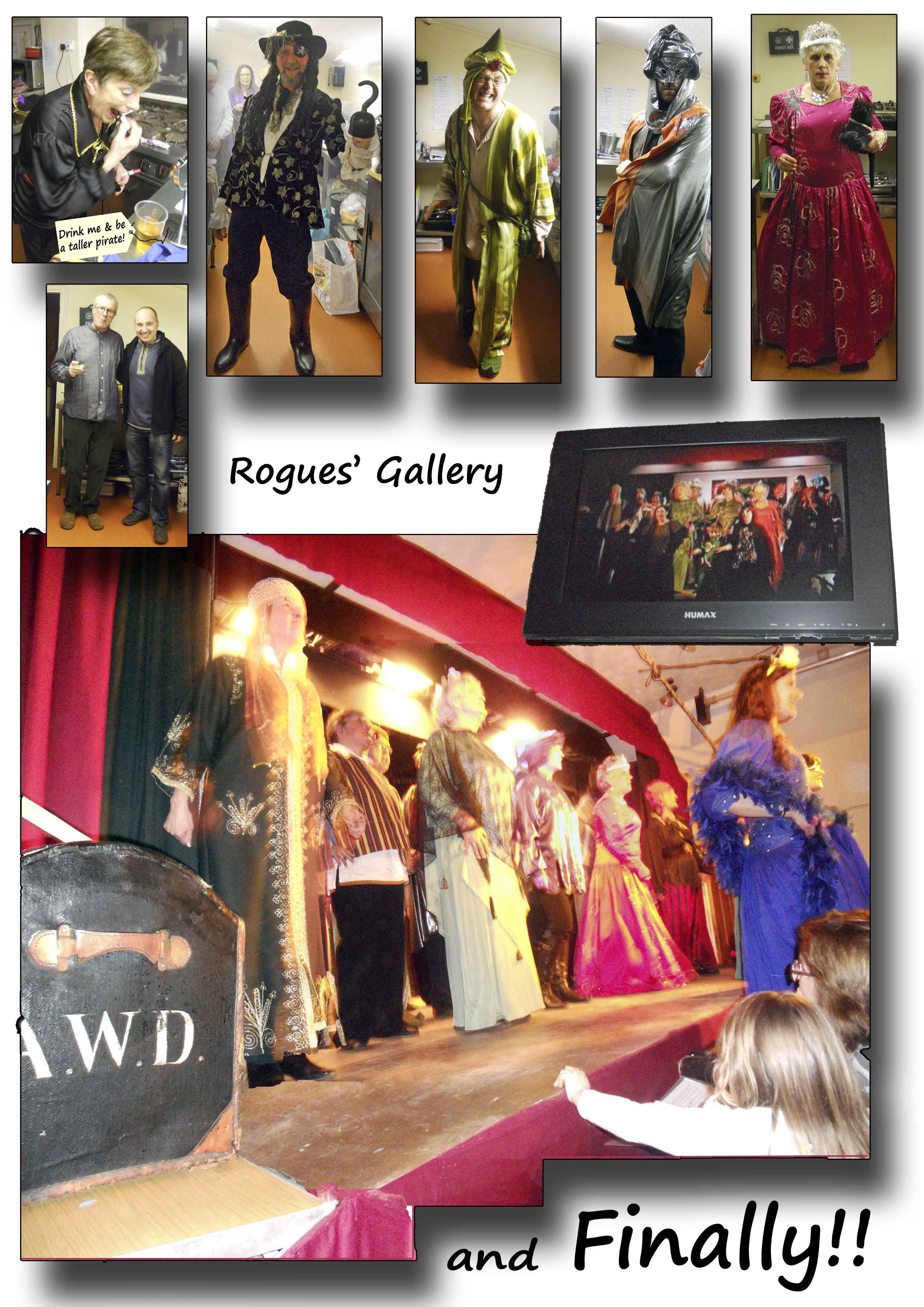