This page contains historical information about the impact of various forms of communication on life in Denton.

The only significant road which crosses the parish is the A143 from Bury St Edmunds and Diss to Great Yarmouth. The original route, now Low Road and the bottom of Danacre Road, just under one mile in length, was bypassed in the 1970's using the track of the disused railway line.

One cause of confusion on the original route is what appears to be an old turnpike toll-house, the Round House, at the bottom of Round House Hill. The problem is – the Diss to Yarmouth road was never a turnpike? One theory is that it might have been built as a Lodge to Denton House; research continues. 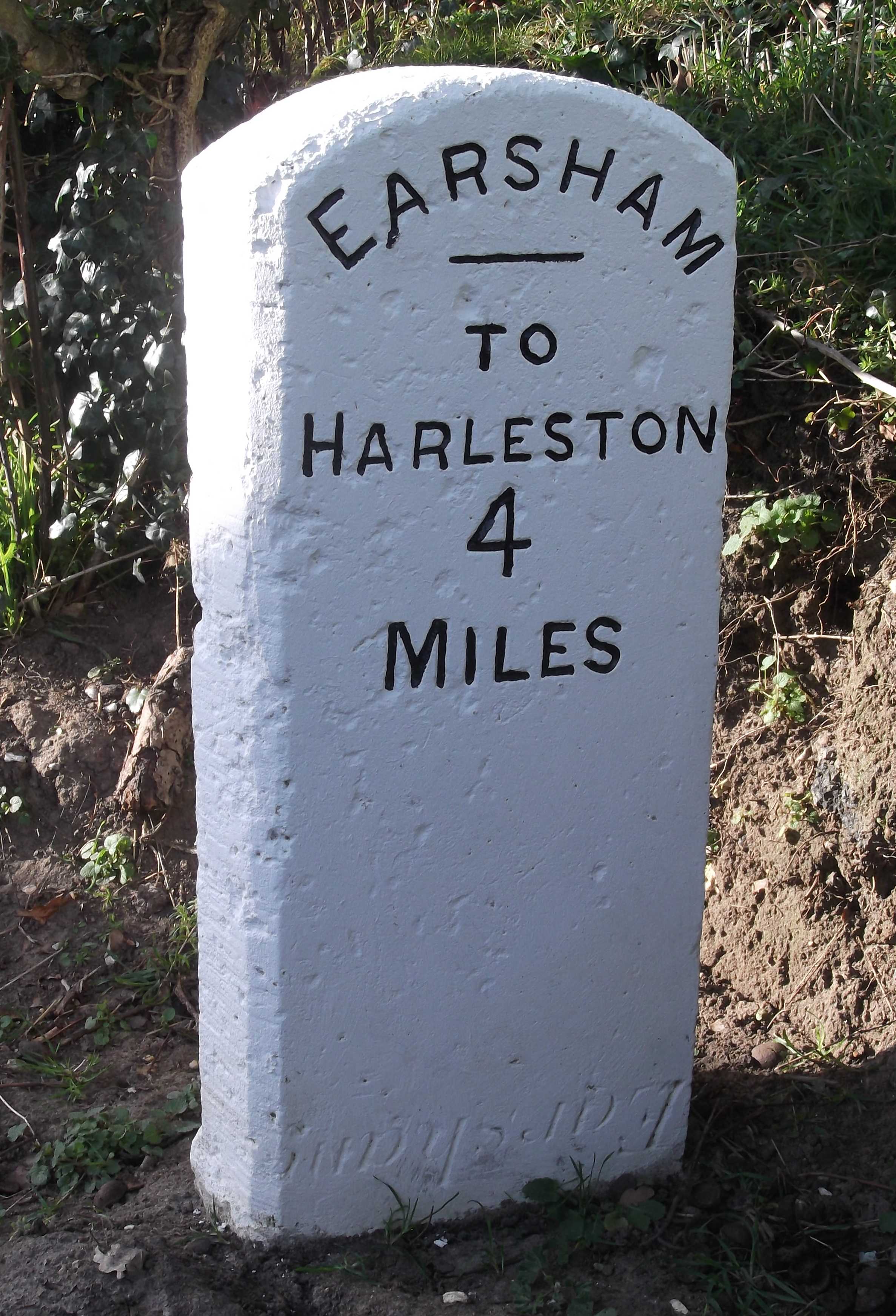 However, like all other ancient major roads, it was originally furnished with white milestones at one mile intervals. None are located in Denton; but the two nearest, in Earsham and Alburgh, are very close.

The first (NO_HBu4), which is just outside the Denton parish boundary opposite Dentonwash Farm, has recently been restored. It indicates - Bungay 3 Harleston 4.

The second (NO_HBu3) is currently outside the old Homersfield station buildings but it should really be a bit further towards the bottom of Round House Hill. There are plans to renovate and re-position it.

The Reference Numbers quoted in brackets are those designated by the Milestone Society. Further information is available from their Website.

Denton remained relatively isolated from the railway system until 1860. Norwich had been linked, via Cambridge first in 1845 and then via Ipswich in 1849, to the national network but residents of the Waveney valley had to wait rather longer. East Anglia, with little industry or raw materials, was rather late in attracting the new transport system but eventually the whole region was covered by a mass of lines. Sadly few survive today and the Waveney valley line is no more.

The Waveney Valley Railway Company was launched by an Act of Parliament in 1851 to link the main Eastern Union Railway line at Tivetshall to Bungay. Problems in raising the funds, the starting capital was £40,000, caused delays and the first section was not opened, to Harleston, until 1st December 1855. Additional Acts of Parliament were required to increase the capital, eventually to £120,000, before the line could be completed. Shortages of labour and materials also caused delays and the owners of the Waveney Navigation (see below) did their best to delay the arrival of competition. Bungay was finally reached on 2nd November 1860 and the line extended to meet the East Suffolk Railway at Beccles on 2nd March 1863, the day on which the WVR was formally merged with the Great Eastern Railway. The updated first edition of the Ordnance Suvey 1" map of this area (Sheet 66) records that when passing through Denton the line was 110 miles from its London terminus.

Denton did not itself qualify for a station but both Homersfield (actually in Alburgh parish!) and Earsham stations were not too far distant. The line was never very profitable and several small stations, including those serving Wortwell and Redenhall, were closed within a few years of the line opening. One burst of activity came with the Second World War and the transport of munitions and fuel for local airfields. Sidings at Earsham station handled 200,000 tons of military stores during the war.

After 1945 traffic dropped steadily with the development of road transport. Passenger services were withdrawn from 5th January 1953 but goods traffic carried on for a few more years. The Harleston to Bungay section was closed completely on 1st February 1960 and by 1966 the whole line had ceased working. The route of the line through the parish, only some 450 metres in length, is now used by the "new" A143.

Rivers have been key transport routes throughout English history; for example the Vikings used them to raid communities well inland. The River Waveney was presumably used to carry goods from time immemorial but a real advance came with the Waveney Navigation Act, passed by Parliament on 17th March 1670, to improve the river between Yarmouth and Bungay. Three locks capable of taking Norfolk wherries were constructed at Wainford, Ellingham and Geldeston/Shipmeadow. The navigation was formally closed in 1934.

During the Canal Age (1760s to 1830s) several schemes were proposed to build a canal to link the Waveney Navigation at Bungay and the Little Ouse Navigation, which terminated at Thetford, via Diss. Unfortunatly none of them got past the drawing board so Denton Lock and Denton Wharf were never constructed. 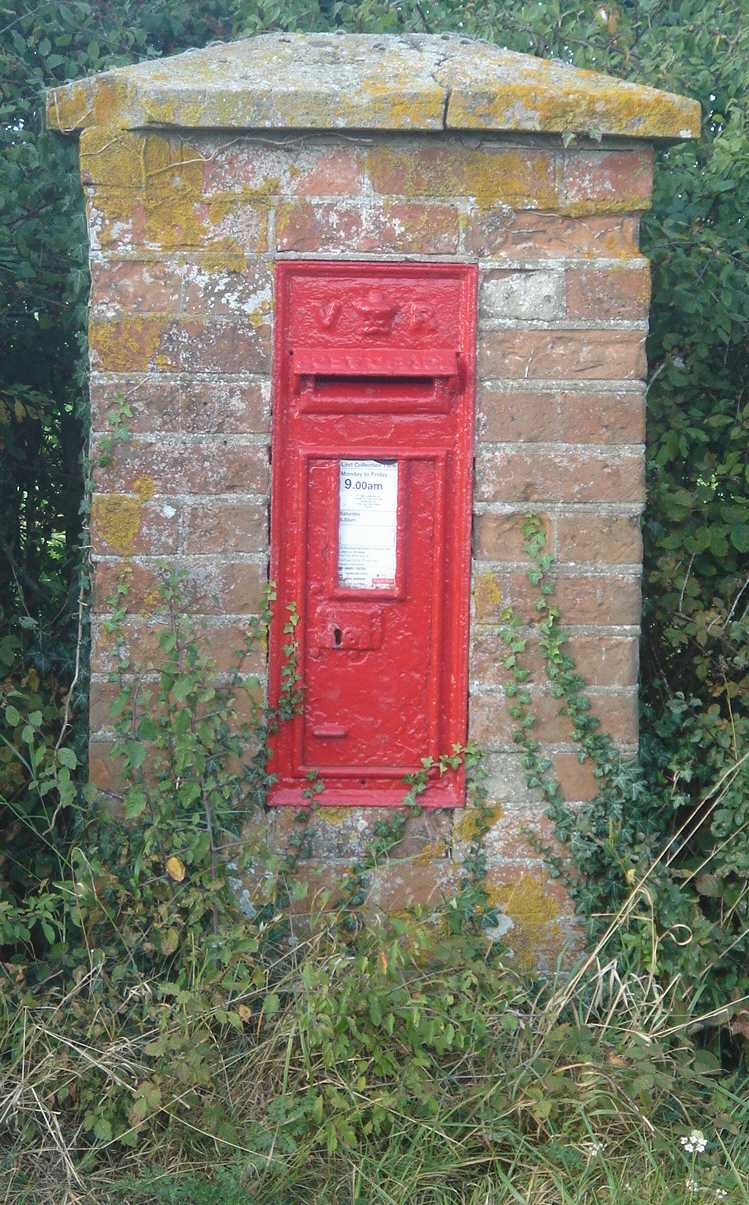 Denton had its own village Sub-Post-Office until the shop at Chapel Corner closed in 1989. Since then the village has been served by the Community Post Office in the Chapel Vestry on Thursday mornings. The fact that the village is linked, via Harleston, to the main sorting office in Ipswich, and thus has an IP post code, has caused confusion at times.

The parish used to be served by four post boxes located at:
Chapel Corner,
Church Corner
near the junction of Danacre Road & Low Road and
near the junction of Norwich Road & Darrow Green Road.
However, in January 2013 the last of these, a fine Victorian specimen, pictured on the right, was stolen! A modern version on a post has now replaced it.

Denton is served by the Homersfield telephone exchange. This is an immediate source of confusion as the village of Homersfield is of course across the county boundary in Suffolk. In the past 999 calls were likely to be routed to the Suffolk police and fire services with a potential delay before those actually responsible in Norfolk were alerted. The use of postcodes to identify locations has now resolved this problem.

The Homersfield exchange was opened on 17th March 1930. Why it was given this name is a mystery as the building is located in Alburgh and three of the four parishes it serves are north of the river in Norfolk. However, as Homersfield station, see above, was also located in the same parish perhaps this was not so surprising? This was a time of great expansion of the telephone service into rural areas with the availability of the new small automatic exchanges. In contrast manual exchanges had been installed in urban areas for many years; Norwich since 1883, Bungay and Harleston from 1907. By the late 1920's rural exchanges were being installed once 8 local subscribers had requested connection. This was the situation in the Homersfield area where the exchange opened with the minimum 8 lines connected. The actual exchange, a "RAX 5", had a maximum capacity of 89 lines and was installed, originally in a brick building on Denton Road, Alburgh. As recently as the 1960's it was moved to the current wooden hut in Low Ditch Road near Piccadilly Corner. Denton lines are connected to the exchange via the green cabinet located at Church Corner.

The familiar three–digit Homersfield numbers disappeared in the change over to the national six–digit STD system in mid 1994. The old numbers were given a 788 prefix under the Bungay area code – 01986.

The village used to contain one public telephone box, opposite the Village Hall but it was removed in 2018.

The Harleston area was one of the first in the country to qualify for a sponsored wireless broadband service in mid 2004. This was promoted by South Norfolk District Council supported by funding from the East of England Development Agency. The system was installed by the Redmoon organisation based on a central transmitter in Harleston relaying to Denton via Redenhall and Alburgh church towers. A further relay transmitter on top of Chapel Farm extended coverage to the north end of the village.

During 2006 BT enabled the Homersfield exchange for landline broadband connection so the need for the wireless system disappeared. It was withdrawn in 2008.

As with all broadband networks relying on copper wires, the historic BT service (and others from suppliers using the same system) cannot provide anything better than low-speed connections which are worst in the parts of the parish furthest from the exchange. It was always feared that it would be some time before a high-speed service was available in Denton.
In 2014 Norfolk County Council started a major campaign to expand faster broadband access across the County. The council officer in charge of the project (who actually lived in Denton at the time!) came along to a Joint Parish Council Meeting in the Village Hall. She explained that the provision of fibre-optic cable connection to local Green Boxes (with the final link to houses still relying on copper wires) would take some time.
At the 2016 Annual Parish Meeting we were told that Denton was now in the programme and that a new Green Box (Cabinet) would be installed at the junction of Trunch Hill and Middle Road. In November 2017 the box was installed and, though BT failed to tell anyone, the new service was available.

During 2018 another new box was installed near Sunbeam Cottage on Norwich Road to serve properties in that area. Unfortunately residents in the more remote parts of the village are too far away from the new cabinets to benefit significantly. They have been told that, eventually, other means will be provided to support them.

An NCC Report on the state of the project in October 2017 is now available.

The Parish Council agreed to sponsor this village website following the Millennium celebrations in 2000 but it took several years to achieve its full potential. Dentontalk, the web-based village communication system was introduced in 2009.