Return to archives for 2015

Some good news for Denton council tax payers has been announced by the Parish Council.

At its recent meeting the Council decided to raise the same amount that it required last year, £3,000, in 2015/16. However, for some reason, possibly due to an increase in occupied properties in the village this year, this will result in the amount of council tax charged to each household going down slightly.

Further information about the Parish Council and the Council Tax System can be found elsewhere on the site.

Christmas Collections - Ours Not Royal Mail's

Once again a substantial sum has been raised over Christmas for a very good cause.

This report has been provided by Jenny Crohill.

Just before Christmas a good troop of Denton folks took to the street and sang carols to who-ever would listen! In fact because there were several of us we were able to split into two groups. The walking group made their way down Chapel Field whilst the second group climbed aboard Dave’s Landrover and worked the top end of the village. After 3½ hours singing we all met at Hilda and Tim’s for refreshment and a grand count-up was made. The total collected was £306 — Amazing!!

As usual the big board was put up in the village hall for everyone to post their Christmas good wishes cards and leave a contribution. This total was £268 — again what an achievement.

All these proceeds, £574, are now being sent to the Bwindi Orphanage in western Uganda. I first visited the orphanage in 2004 when it was a very small operation. Orphans were being taken in for care, health treatment and education but the conditions were extremely basic. Every year since then Denton has collected money from carol singing and the Christmas card board and sent it straight to the orphanage. Over the past years we have raised a considerable amount of money, all of which goes directly to Bwindi with no other admin costs being taken out of it.

Whilst bumping along in the back of the Landrover carol singing, Sarah Henderson asked who/what were we raising money for. I explained where the funds were sent only to be told that her family had also visited Bwindi a few years earlier as volunteers at the community hospital which is all part of the orphanage. What a surprise and fantastic to think that there is now another connection between this tiny village in Uganda and Denton.

A huge thank you to everyone who contributed and turned out to sing. I know all your efforts are so much appreciated back at Bwindi.

A new service for Denton residents was launched today and was much enjoyed by all those who took part.

The first Second Tuesday lunch was served to 40 residents at the Village Hall. Two courses were provided, both delicious, with a cup of tea to follow. Needless to say the event provided an opportunity for a good mardle. 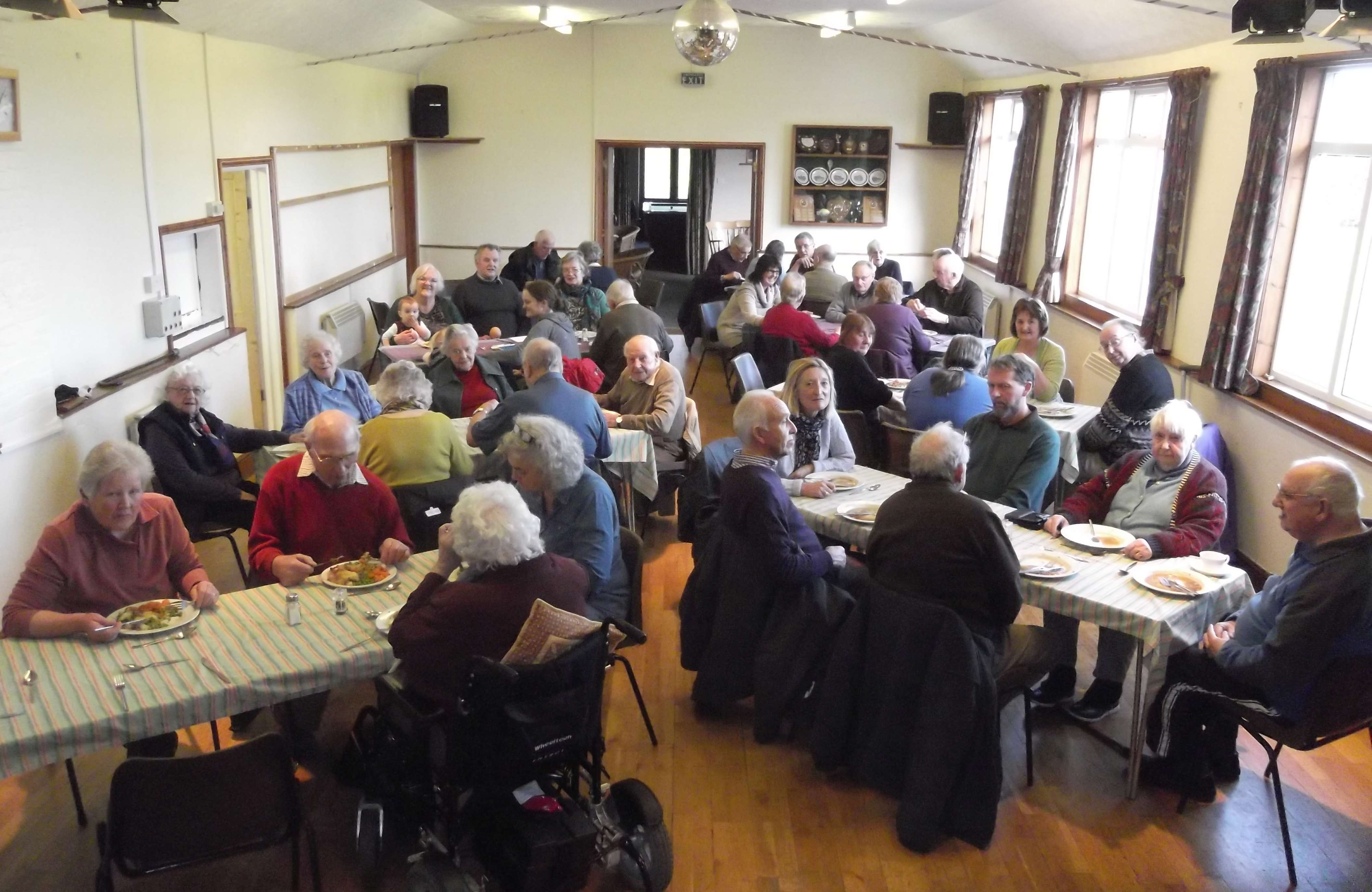 Congratulations and thanks must go to the organiser, Doris Lambert, and her team of willing helpers.

The second Second Tuesday lunch will be on Tuesday, 10th February.

Congratulations must go to the staff and pupils of our local school for their recent success.

As reported in the EDP (Thursday, January 8th, Page 22), Alburgh with Denton Primary School has been named as the top performing Norfolk primary school for their Year Six tests.

Key Stage Two figures for reading, writing and maths from the Department for Education show how children are performing at the age of 11. AwDPS has climbed from 85% of pupils achieving the expected Level Four in 2012 to 100% across every area in 2014.

The School has also been named as one of the top 250 performing primary schools in the whole country. Well done everybody!

This year's remarkable display of Christmas Lights in the village has produced an interesting debate.

In past years some residents have erected a limited amount of festive lighting on their properties for the Christmas period but this year it has expanded dramatically particularly at the top end of Norwich Road.

The display produced comments in the January edition of the Parish Magazine where The Rambler's Countryside Ramblings included - "And what about light pollution? I remember the old days when in many villages houses were just lit by a few oil lamps, but while nobody wants to be without electricity, I do wonder if we have swung to the other extreme with many houses coated in Christmas lights, making the countryside look like suburbia."

The response on Dentontalk has been immediate with lots of support for the lights and promises of even more next year! We will obviously need all the extra electricity produced from renewable sources.