We are able to provide two obituaries for Sir Jeffrey. 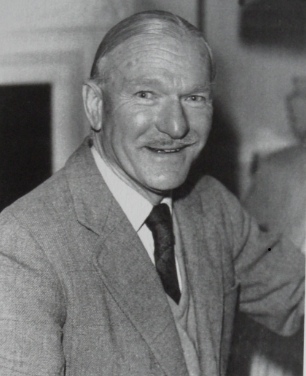 It was with deep sorrow that we heard of the death of Sir Jeffery who with Lady Bridget became great friends and benefactors to Denton after they moved to Denton Lodge in 1976 following his retirement as regimental commander of the Coldstream Guards. At the time they were looking for a home in the country and were lured to the area through Lady Bridget's memories of her childhood spent at Flixton Hall, the home of her father Sir Allan Adair, which was sadly demolished in the early 1950s.

Born in London in 1919, Jeffery spent his early childhood in South Africa where his father owned an orange farm. He had settled there after being invalided out of the army having been wounded during the ''Great War". Jeffery came back to England for his education at a prep school before going to Eton and Sandhurst prior to his commission in the Coldstream Guards.

He was sent to France with the Guards Armoured Division at the outbreak of war in 1939, and was brought home in the Dunkirk evacuation which he described as the worst experience of his life. In late 1940 he was recruited by the Coats Mission to guard King George VI and the Royal Family in case of a Nazi invasion, spending much of his time around Sandringham when he and other officers of the bodyguard would often be invited to dine with the royal family at Appleton House where a concrete bunker had been constructed in case of an emergency.

He rejoined the Guards Armoured Division in 1942 when he became ADC to the General Officer Commanding Southern. Following the Normandy landing he took part in the campaigns in Germany where he was involved in the bitter fighting for the Rhineland. He was awarded the Military Cross in March 1945 during this action. At the 50th anniversary of VE Day, during part of the village celebrations at Denton Village Hall, Sir Jeffery gave an enlightening account of the history of this campaign.

In 1953 Jeffery married Bridget who was daughter of his commanding officer Maj. Gen. Sir Allan Adair. Typical of a military family they had to make their home wherever the regiment sent them which meant spending their first three years of married life in Germany - their two daughters, Katherine and Camilla, and their son Guy were born in Germany and London. In 1959 he succeeded his cousin as the eighth baronet, the family title which dates back to 1795. In 1964 Sir Jeffery became regimental commander of the Coldstream Guards, and in 1973, as his final role after a long army career, he was appointed ADC to the Queen, 33 years after he had been part of her personal protection squad.

Sir Jeffery served our village as churchwarden to St Mary's Denton for 20 years during which time he used his influence to gain several grants to help finance repairs to the fabric of the Church and supervise the work, as well as providing help through the generosity of the Darrell-Adair Trust. In 1985 Sir Jeffery was appointed High Sheriff of Norfolk and many of the Denton parishioners were privileged to be invited to attend the Garden Party held at Denton Lodge to mark the occasion, which was accompanied by the band of the Coldstream Guards.

Denton was fortunate and privileged to have such a distinguished personality to come to live with and join in our community with Lady Bridget and we are forever grateful for their friendship. We extend our sympathy and condolences to Lady Bridget, Katherine, Camilla and Guy together with their families including the eight grandchildren.

Guards officer and former High Sheriff of Norfolk, Sir Jeffrey Darell, who has died aged 93, was a member of the personal bodyguard protecting the Royal Family in the event of Nazi invasion. After being evacuated from Dunkirk, he was recruited by the Coats Mission, which was set up to protect the King and Queen and Princesses Elizabeth and Margaret. He served at Sandringham, Windsor and at Wellington Barracks, London. The task was “to guard the King and Queen and, in an emergency to escort the Royal Family to a place of safety”.

In late 1940 and 1941, when the risk of invasion was real, it was a very special duty. At that time Sandringham House was closed and the Royal Family were living, “very simply” said Lt Darell, in Appleton house, an estate property that boasted a large concrete bunker, specially constructed for their safety but evidently never used.

“The main danger was from airborne attack or a raid to capture the Sovereign. During the day a standing patrol kept watch from a nearby water tower. At night a platoon was dug in round the house and patrolled the area while another platoon slept clothed, ready to move at a moment's notice”, he later wrote.

Officers from the bodyguard took it in turns to dine with the Royal family at Appleton House and were regular members of the King's shooting parties. Darell recalled that the King, “who was a magnificent shot”, had a remarkable knowledge of the country round Sandringham and placed each gun himself at every drive, because, as he said, he knew which way the birds would fly.

In 1973, in his final role in a long Army career, he was appointed ADC to the Queen, 33 years after he had been part of her personal protection squad.

Jeffrey Lionel Darell, who was born in London on October 2, 1919, went to Eton and Sandhurst and was commissioned in the Coldstream Guards in July 1939. Sent to France after the outbreak of war he rejoined the Guards Armoured Division in 1941. He was ADC to the general officer in command, southern, in 1942.

He landed at Normandy and then took part in the campaigns in Germany where Major Darell was involved in the bitter fighting for the Rhineland. In March 1945, he was awarded the Military Cross during an action in which “the Germans fought for every garden, every shed, every room in each house”, according to the regimental history.

In 1953, he married Bridget, the eldest daughter of his commanding officer, Maj Gen Sir Allan Adair. In 1959 he succeeded his cousin as the eighth baronet - the family title dates from 1795 - and he held a series of increasingly senior posts including command of the 1st Battalion Coldstream Guards in Germany. Then seven years later, in 1964, he became regimental commander of the Coldstream Guards. He commanded the Mons officer cadet school between 1970 and 1973 and retired the following year with the rank of brigadier. For 10 years, he worked for the Army security services in Germany, Northern Ireland and also on the mainland.

A good shot, he was a member of many local syndicates and particularly enjoyed salmon fishing in Scotland.

Since moving to Denton Lodge, near Harleston in 1976, he took a keen interest in local affairs. He was a long-serving church warden. In March 1985, he succeeded Jonathan Peel, of Barton Turf, as High Sheriff of Norfolk - signing the oath of office on the tall desk that had belonged to Sir Robert Peel, the Victorian prime minister.

He leaves a widow Bridget, and two daughters Katherine and Camilla and a son, Guy Jeffrey Adair, who succeeds as the ninth baronet.

A service of thanksgiving was held at St Mary's Church, Denton, on Saturday April 27 2013.